Figure out what to do with the footer area in responsive Vector
Closed, ResolvedPublic
Actions

We need to figure out what to do with the footer area in responsive Vector. Considerations:

•Eliminate the sentences that nobody reads --> shorten to "Terms of use"?

Sounds good; the footer is very cluttered as-is and this would definitely be a welcome change.

•Trim off some of the duplicate links --> some are already in the sidebar...

Duplicate -- how so? In the screenshot the only duplicate entry I can see is "About Wikipedia"; while Wikipedia might link to its about page on the sidebar (MediaWiki:Sidebar), you cannot assume that everyone else does this. We need to take into account that the same sidebar is used for responsive and normal/desktop mode (and I don't see that changing anytime soon), and I'd be willing to bet that most third-party sites out there do not link to MediaWiki:Aboutpage in their MediaWiki:Sidebar.

They're a nice touch and I'd rather keep 'em there, but in the long run this might be the way to go, unfortunately. While on Wikimedia wikis there are only two buttons (powered by MW/a WMF project), this isn't always the case for third-party wikis:

The direct link to CC BY-SA is important.

"About Wikipedia" seems the only duplicate.

I spared you a thought process that involved predicting the impact such a change would have on Wikimedia's brands through centuries.

The footer is no longer a problem on mobile screens given the menus are now moved to the top and can be hidden.
https://www.mediawiki.org/wiki/Desktop_improvements?useskinversion=2&useskin=vector 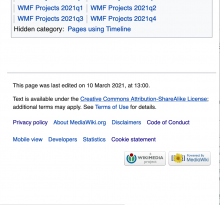