When looking at suggestions, users may find interesting articles to translate for which they don't have time at the moment. Being able to mark those to easily find them later, helps to decouple the selection of articles from the translation activity, decreasing the chance of missing translation opportunities.

Dashboard without any translation for later: 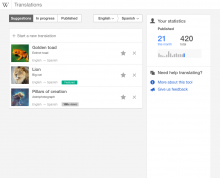 Dashboard with one translation for later: 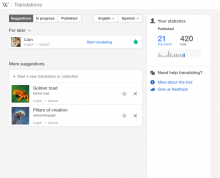 The "for later" list is a default list that is useful beyond the suggestions in the dashboard. In other contexts where users can start a translation, we can consider to keep an option to "add for later". We can define separate tickets to incorporate the idea to the "New translation" dialog, red link cards and similar areas of the UI.

Change 239059 had a related patch set uploaded (by Santhosh):
WIP: Discard and favorite the suggestions

Change 239059 merged by jenkins-bot:
Discard and favorite the suggestions