We'd like to enable caching for the subset of RESTBase's endpoints pertaining to the Mobile-Content-Service on the text Varnishes. Specifically, the following URIs should be cached:

PR 317 introduces the HTCP purging logic into RESTBase, where all of Mobile-Content-Service's endpoints are purged from the cache as soon as an update job for a specific title is received from the job runners.

Note: the purging logic has been tested in the Beta-Cluster-Infrastructure (cf T113235: Test HTCP purging in labs) and verified it works.

Currently, the RB-related VCL implicitly assumes that RB responses are all no-cache, and thus does things like using backend_random instead of chashing, and setting req.hash_ignore_busy to avoid coalescing on cache updates. We'd want to switch back to the chashed inter-cache backend defs and remove hash_ignore_busy if we think RB is going to offer cacheable objects in general.

Originally, the intention was to cache in the front-end caches only. I agree though that using the backends for caching could improve performance in Amsterdam, as currently RESTBase is only set up in eqiad and codfw. We have plans to look into having RESTBase instances on the edge by the end of the fiscal year, but we can always re-evaluate then. Typically, cacheable items will be backed by storage in RESTBase, so the penalty of a front-end cache miss is relatively low.

Related tickets to this discussion:

A basic PR is now available at https://github.com/wikimedia/restbase/pull/511. This does not set up purging yet, and only enables short-term caching limited to one hour.

Purging and long-term caching is going to follow. This is dependent on T126571, and should see at least some progress in the next weeks.

This was deployed yesterday afternoon SF time. Even with a short TTL of one hour & beta use only, peak request rates reaching RESTBase itself appear roughly halved: 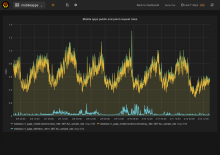 This suggests a decent cache hit rate, which should further reduce time to first byte.