I'm going to type 'wikilove and 'seal and 'farmer and 'flowchart all without the apostrophe " ' " before them:

Mentioned Here
T94150: Fix scenarios that fail at en.wikipedia.beta.wmflabs.org or do not run them daily

uh, did something change in the last 15 minutes? 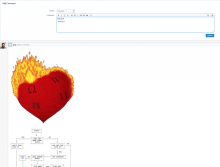 They need to be on their own line, not part of a paragraph with other text. So sentences containing macro words won't trigger macros, but putting the word in a block by itself will.

This rule wasn't in place until ~2011 (until then, macros would replace even in the middle of paragraphs), when some sort of fierce sports rivalry at Facebook saw many macros created for "a", "if", "the", and so on that expanded into huge images supporting opposing teams.

The upstream approach to this general issue is to restrict who can create new macros (Applications → Macro → Configure → Can Manage Macros) and then have an informal/social process for other users to petition to have a new macro added. That effectively prevents the definition of macros that overlap with real words.

Seems like this has been solved because it only happens when these words appear on a line by themselves and haven't heard complaints in the last couple years.

Calling it. Thanks for the ping.