Currently, the TOC flows below the status bar.

Mentioned In
T127766: Points data not completely available in dump used by Phlogiston
rAPIOSef260835cb09: Merge pull request #475 from wikimedia/tocStatusBar
T119024: Add a blue background to "Contents" label and title of article in table of contents
Mentioned Here
T126337: As a user, I shouldn't see a nearly-fullscreen TOC when in landscape so that I can interact with the TOC more easily
T127342: [REGRESSION 5.0.0.699] Status bar visible in fullscreen gallery
T124820: Table of Contents close button needs to be accessible

Duplicates Merged Here
T126337: As a user, I shouldn't see a nearly-fullscreen TOC when in landscape so that I can interact with the TOC more easily

@barbarar this would be an easy, but valuable fix! some suggested approaches:

Or, hide the status bar when TOC is shown.

Some examples of how other apps address this issue:

Google's account/etc. sidebar (in this case, Google Maps, but it's in almost every Google app):

@JMinor @Nirzar do either of you have a preference for how we handle this?

Hiding the status bar is tricky because it will resize the article underneath as well. But we could hide the status bar ALWAYS when viewing an article - that way its not an issue anymore for the ToC

I think the white bar at the top is an ok solution. Not great but solves the issue.

Another idea is making the entire header "sticky" so it doesn't scroll up.

Similarly, we could make the header sticky but shrink it when the user scrolls (so it is still sticky but takes up less space)

Hiding the status bar is tricky because it will resize the article underneath as well.

It doesn't in Google Maps app, and I think our content already extends under the status bar so it shouldn't move.

Similarly, we could make the header sticky but shrink it when the user scrolls (so it is still sticky but takes up less space)

Mentioned this in the other ticket... maybe we should just merge these two

The header takes up a fixed amount of space, and the rest of the ToC scroll under it. We could squeeze and hide the "CONTENTS" or Title part as you scroll down, so it doesn't take up to much space, and its a much need "jump to article top" action.

In landscape, only the "squeezed" version (suggest just article title) would be shown.

In either case, the header has a different treatment (as in blocked ticket) which extends under the status bar, but doesn't have text so it doesn't obscure it.

Another reason to have a sticky header is it would give a place for explicit close button, solving accessibility issue T124820.

@Nirzar please update this ticket to reflect breaking out what goes in 5.0 and what goes in 5.1 (separate ticket for the latter), per estimation. CC: @JMinor

White background and sticky header only. ^

Additional note from estimation: Break up this 5 ticket into a 2 and a 3: one is a white background, one is a sticky header. Still need separate 3rd ticket for animations.

@Nirzar @Fjalapeno @JMinor I had some ideas that led me to think we could simply hide the status bar when showing the TOC w/o affecting the article view underneath (similar to the Google Maps example I posted earlier). Let me know if you think it's worth looking into. Keep in mind, this would also potentially solve T127342.

@BGerstle-WMF i tried that but if you hide it with conventional ways, the title bar jumps up. if we can hide it without any jump in base view controller that would the best solution to this problem. 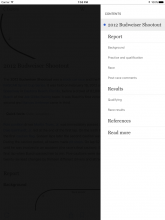 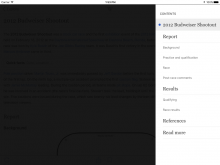