Even on cached page views and repeat views, rendering takes a fair amount of time. @Peter suspects the parsing of data URIs to be a possible bottleneck. Especially on mobile.

This is non-trivial to undo since we rely on these to some extend to avoid flashes of unstyled content (e.g. hover states, dialogs etc.). Normally, when browsers load stylesheets, referenced images are not downloaded until after the selector applies (at which point it's kind of too late). We may be able to work around this by using preloading or prefetching, however.

Let's start by investigating a static copy of our page with and without data URI embedding enabled in a stylesheet and run it through WebPageTest and others to compare rendering.

Change 230286 had a related patch set uploaded (by Krinkle):
Do not embed images in file modules as data URIs

@Krinkle / @Peter to discuss next steps.

Raising priority. At the very least, there should be no data URIs in above-the-fold CSS. @Krinkle, could you take this on?

@Peter and I did some research today with https://gerrit.wikimedia.org/r/257887 applied to test.wikipedia.org and comparing the before and after in WebPageTest from various browsers and devices.

We previously felt like the browser (especially on mobile devices) were spending a lot of time parsing, processing, and other synchronously allocating image objects for images found in data URIs in the stylesheet.

However after removing all data URIs and replacing them with regular urls that point to the same resource, we found no notable speed gain. Not on desktop/Chrome and not on a real Android device. 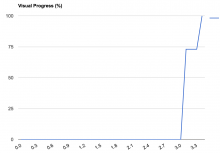 Both cases, first render is at the same point, so we didn't get text earlier. Regression.

Either way, the final render ("settled") was also later still. So a loss in almost all ways, except for the small bandwidth gain in the CSS payload.

Change 230286 abandoned by Krinkle:
Do not embed images in file modules as data URIs

Reason:
Moving conversation back to T118514 on Phabricator.

Closing per above conclusion. Opened T121730 for the audit.

@Krinkle I'm wondering if your test cases for WebPageTest were first load results? When encoding in base64, the issue stated in this heatedly discussed article from mid 2013:

Regardless of whether the data URI content exists in a cached CSS or HTML file, the browser must decode the image each time a page renders: the decoding cost is paid repeatedly every time a page is viewed.

First off, it's not clear how appropriate the data from the article is nowadays, mid 2013 is a quite a while back. Also, for SVG icons we don't use base64. Only URL encoding is used due to performance reasons. SVG rendering (URL decoding?) speed might have increased significantly in recent mobile browsers.