Assigned To
Authored By
Tags
Subscribers
View All 21 Subscribers

Eventually, we'll need to restore normal permissions on the Korean Wikipedia, temporarily changed in T94388 following a local discussion which feared catastrophes. Catastrophes didn't happen anywhere, hence there is currently no rationale for the unconforming configuration.

Positive effect on other wikis

We should probably gather some data from a wiki which Korean users may feel as similar enough to their case and then present the data locally: perhaps Chinese Wikipedia? https://stats.wikimedia.org/EN/EditsRevertsZH.htm shows a slight increase in unregistered editing and a stable revert ratio. Norwegian Wikipedia shows a different revert culture. Vietnamese even has reverts going down proportionally, but the editing patterns are different. https://stats.wikimedia.org/EN/EditsRevertsVI.htm

All this tells us that letting unregistered editors edit on Mobile is very likely to produce a net positive on the Korean Wikipedia, even more than other languages. 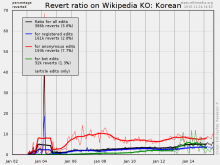 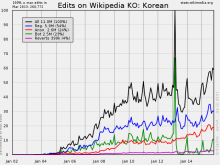 @Nemo_bis Any idea to contact someone of kowiki to suggest to launch a discussion?

@Nemo_bis Any idea to contact someone of kowiki to suggest to launch a discussion?

It would be useful to first have some ideas on relevant data/considerations to include. I think @tomasz had some ideas on the matter.

I think it was the other Tomasz.

I really meant Odder, but I guess I was wrong. :)

Actually, we have a Korean user interested by more technical aspects, the Josa extension author.

Just a note, local community considered this to be permanent stuff, not to be reverted after ~~~ days or such.

I'm hardly to say support or oppose for this task, although the past consensus on kowiki looks violated the Founding principles global policy, I should say even if Sony Official Website was hacked from Korean, we should probably make sure anti virus software on our server are working well.

What's the point? What's the relations with Sony blah blah and the restriction on kowiki for unreg IPs editing?

Per Local consensus, I am going to submit a patch to revert this.

[PS. before the SWAT, I was able to save the page in IP mode, which might mean this config was not useful..]