From our graph that track amount a time a change spend in gate-and-submit ( https://grafana.wikimedia.org/dashboard/db/releng-kpis?panelId=2&fullscreen ): 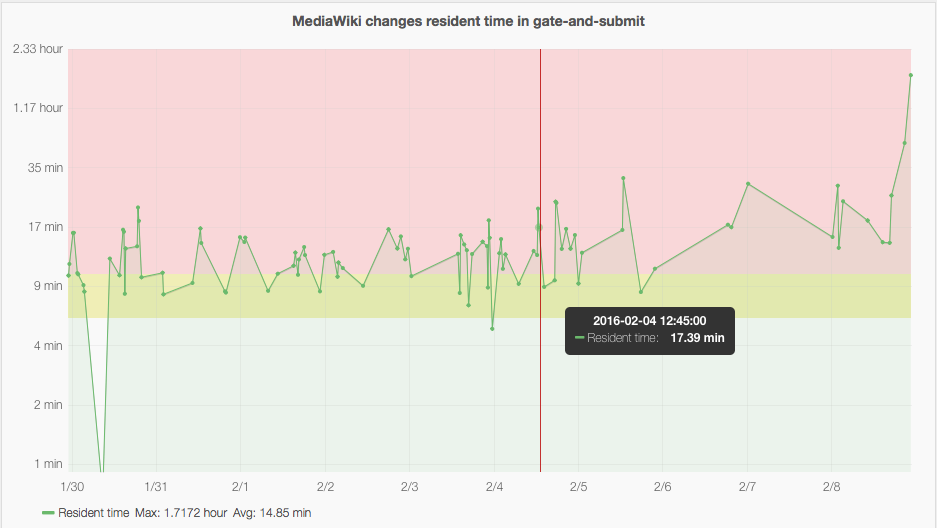 Another reason that Timo was mentioning is that we have only four Precise slaves that runs the php53 and those jobs are throttled to only one build per node.

The low hanging fruit is to add more Precise slaves. Maybe look at whether Scribunto should really be part of the shared job.

Pooled four more Precise instances with 2 CPU, will have two executors and that will let Jenkins to spread some jobs from 4 to 8 slots.

It is going to take time to have puppet to fully provision them.

I have applied role::ci::slave::labs and puppet is running on all four instances.

I have added the instances as Jenkins slaves and put them offline.

Whenever puppet is done, we can mark them online in Jenkins then monitor the jobs running on them are working properly.

Not sure if this is related: https://gerrit.wikimedia.org/r/#/c/269171/ "only" took 43 minutes to go through the zuul queue, but was V-1ed because https://integration.wikimedia.org/ci/job/mediawiki-extensions-php53/738/console timed out (failed to finish within 30 minutes).

We really want Wikibase tests to run when a patch is proposed on mediawiki/core. So it is left around.

Bunch of patches got force merged which deadlock Zuul entirely for 5 minutes per merged commit ( T93812 ). I have live hacked Zuul on gallium by editing /usr/share/python/zuul/local/lib/python2.7/site-packages/zuul/trigger/gerrit.py:

Immediate issue fixed but the snowball effect of doom will happen again eventually.

The nature of a Mediawiki extensions is that a change to most extensions can make the php tests of core or another extension fail, with appropriate hook API design and accompanying integration tests this can be avoided, but I assume we are not anywhere close.

A good way to decouple code is to move it to a component.

An easy way to speed up the tests is to parallelize them. I.e. run multiple phpunit processes each running a different part of the tests, this can also be done over multiple machines if a deterministic sharding function is used.

Perhaps our tests can be optimized to be faster.

Another thing you might try is excluding the LuaStandalone group. That stops about half of Scribunto's tests, but that half seems to take about 75% of the time.[1] Unless the core change being tested somehow impacts shelling out to external processes, it's unlikely to affect LuaStandalone but not LuaSandbox.

It also wouldn't hurt to have the CI infrastructure is configured to use $wgScribuntoDefaultEngine = 'luasandbox'; if it's not already, to speed up any tests (e.g. parser tests) that use Scribunto without explicitly specifying an engine.

Setting to Normal as we fixed the problem for now, but we're working to get scribunto back into the pipeline (see blockers)[

A lot of the issue is fixed by:

For Scribunto there is T126670, and we have other tasks around regarding the PHPUnit tests being just painfully slow.