Assigned To
None
Authored By
Tags
Subscribers
View All 16 Subscribers

Noticed this the other day. A person which is a lot in the newspapers now in Norway had these related articles at the bottom of the page about him. He is a profiled person on the right wing, but these connections was a little extreme. I guess it has something to do with reading patterns, and no one is really to blame, but we still need some way to avoid this extreme result. 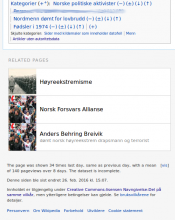 The "related articles" for a specific person in the news.

The problem as defined in the description appears to be that the links provided by the related pages feature (and other similar features) may sometimes be offensive to the subject of the article. An hypothetical extreme example of this would be reading an article about a contemporary German politician, and one of the suggested pages is Adolf Hitler or Nazi Germany. Of course, the morelike algorithm that provides these reading suggestions is totally unaware of this context. The user doesn't know this, of course.

Similar features on other sites have these problems too. They're generally handled by allowing individual results or even the entire panel to be hidden. This typically doesn't directly affect the algorithm, so the next user will still see the same suggestions next time. This is mostly just a placebo solution, which makes the user feel better but doesn't do much else, so that doesn't really seem like enough here. There's also options to provide written feedback when the results are hidden, which presumably is used by someone to manually tweak the results, but this bug report itself shows that's not really the problem; users are aware of these issues and want to fix them, but have no mechanism to do so.

The solutions proposed in the task description look interesting. A per-page blacklist, which lists specific articles which should not be recommended on that page, might also be an option. I'd be interested to hear if anyone else has any other ideas.

Another option: display a little tooltip which explains to users how the suggestions are generated and that they might not necessarily be super helpful or may include inflammatory things. That's the simplest option. It doesn't seem enough to really solve the problem, though.

@Deskana
'bad results' applies to a number of different classes of bad results. The category-level filtering suggested is, in my mind something that solves one set of issues, but leaves other's (like this one: https://www.mediawiki.org/wiki/Topic:Swjyfj59pkjfol7m, where popular pages are showing up instead of relevant ones) unchecked.

I think there are 3 global solutions that have been suggested that I would rather explore, specific to related pages module at the bottom of the page:

is probably a good way to go.