On our local instance the metrics are pretty stable but sometimes they increase with almost 1 second and stays that way for some time. I want to know that these jumps really reflects the page being slower and not something that happens on our WPT server (and I hoped testing using WPT.org would help us with that).

It's hard to say that the numbers from WPT.org shows us the same picture. When we run on WebPageTest.org we don't specify exactly which server that will run the test, that can make the metrics differ between runs.

The first step should be to check that we runs the tests the exact same way on WPT.org and our own server.

Been tracking this in two different tasks so merged it now.

The configuration os the same, only difference is that on our own instance we track only first run. I've changed that for WebPageTest.org in https://gerrit.wikimedia.org/r/#/c/277196/

A couple of things we can do to move forward:

I have added another amazon instance (eu-west-1) that is started from the crontab every 50 minutes (to make sure it uses the same instance) on the wpt server. Lets see what kind of numbers we get from that. I'll add a graph when we have some numbers.

We got the same thing on the other instance:

The yellow and the blue lines are WPT on a Amazon instances, the green one is WPT.org. Lets see if there's a way to increase CPU/memory on one of them. I think configuring the main server, and then drop the agent running on Ireland should do the trick.

I've changed now (I hope) so we will use m3.large for Ireland. There's no documentation but it looks like this is the place: https://github.com/WPO-Foundation/webpagetest/blob/908f9dde6a5ba560dfdfe30865874930f9038ebf/www/settings/ec2_locations.ini

We got the larger instance up and running yesterday and it made a difference.

I want to keep it up and running for a while just to see if we get medium size agent going down and see what happens to the larger one at that moment.

We have had a change again where the SpeedIndex & start render went down. The orange line is the large server and the green line is our default:

@ori helped me out and looked at the metrics we collect from real users. But first: I did check some other things in WPT:

For FF and SPDY waterfall graphs and number of requests and sizes are 0, so we cannot use that. But I checked the same for Chrome to see if I could see some changes in the pages at the same moment that we see the changes in timing metrics. I could not see anything that's correlated. But I could see that other metrics also are affected, our own user timings too (mwLoadStart and mwLoadEnd).

So @ori checked mediaWikiLoadComplete during the time when we have seen the problem in WPT: 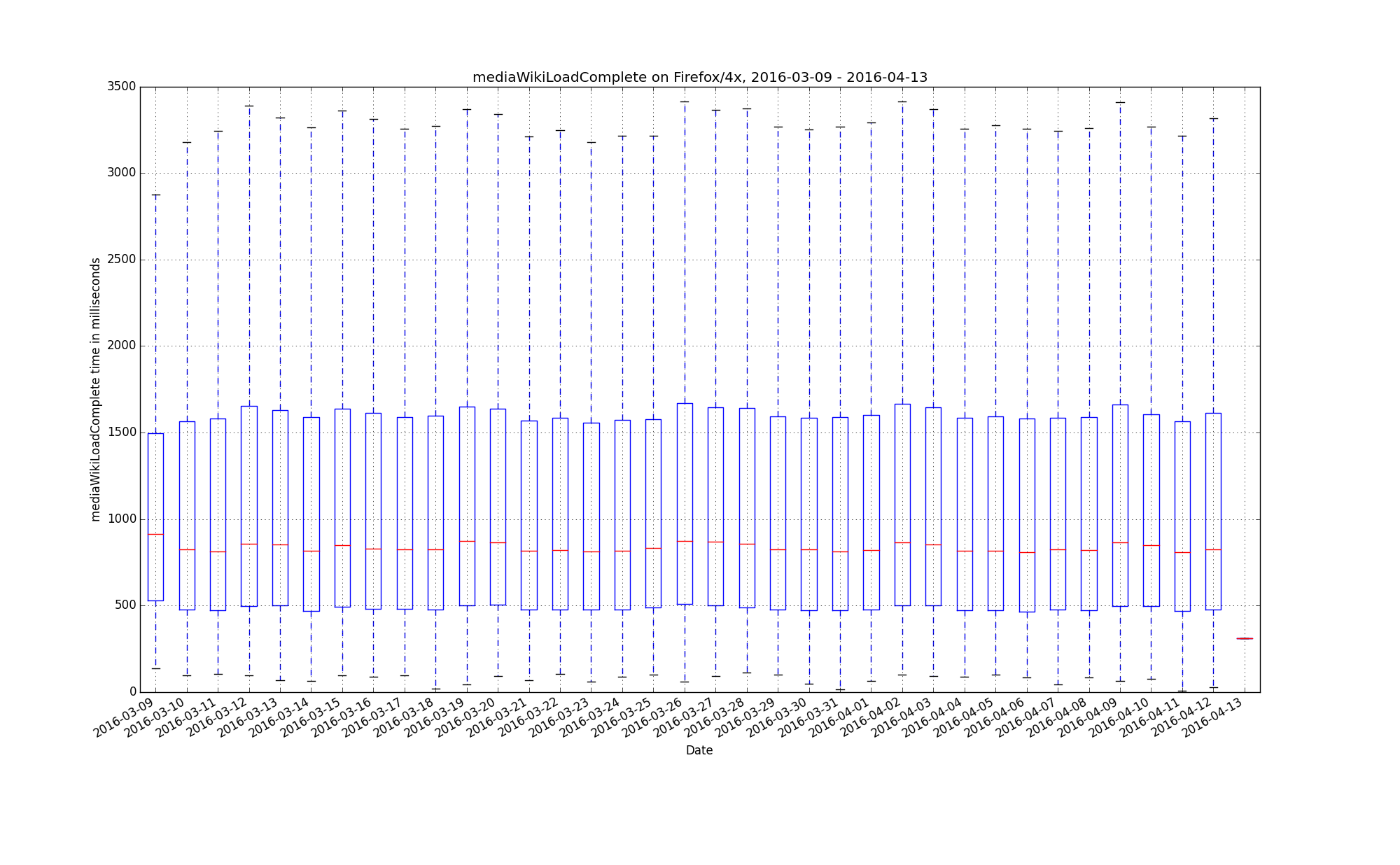 We cannot see the same thing in our RUM data.

Let me summarize:
During a couple of months we have had four peaks that continues between a couple of days or a week when we measuring our Facebook page using Firefox. I've added an extra WPT agent running in Ireland, and we got the same behaviour there. I've increased the cpu/memory size of the agent and got the same pattern (but the difference in timings isn't so big).

There's a couple of things I wanna do:

Ok, I think the problem could be that our instances (even the one running on Ireland, the large one) is too small, check out the CPU and the waterfall graph on this run:
http://wpt.wmftest.org/result/160511_YT_20/1/details/

It doesn't look healthy and I hope the long pause in the graph never happens IRL.

Peter closed this task as Resolved.May 25 2016, 8:00 AM
Peter claimed this task.
Comment Actions

We updated the agent instance site I think that will do it. If this happens again, lets re-open the task.