Assigned To
None
Authored By
Tags
Referenced Files
Subscribers
View All 13 Subscribers
Tokens
"Like" token, awarded by Liuxinyu970226.

Per consensus at cdowiki and translatewiki.net, we would need to have Min Dong translations in both Han script (cdo-hani) and Latin script (cdo-latn) separated, and disable cdo as "This language code should remain unused. Localise in cdo-hani or cdo-latn please.".

We need some questions answered: 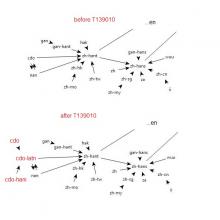 The creator of Min Dong wiki (cdo wiki) was GnuDoyng. He was a Fuzhou Christian and the Fuzhou version of Bible was printed in cdo-latn script (Min Dong Chinese, Foochow Romanized script), and therefore he preferred to type in cdo-latn script. As a result, the cdo wiki used to be only written in the cdo-latn script.

As time went by, some other native Min Dong speakers came to edit the cdo wiki, and many editors preferred to use the cdo-hani script (Min Dong Chinese, Chinese characters script). As a result, on June 22nd, 2013, the first cdo-hani script entry was added into the cdo wiki. Then, here came many cdo-hani script entries, and the two scripts in our cdo wiki started to run together parallelly. Now we hope these two scripts will be separated into two part, namely cdo-latn and cdo-hani, just like the Chinese wiki, where exists four variant scripts, namely zh-cn, zh-tw, zh-hk and zh-sg.

The default/fallback locale does not really matter, I think. It could be either one. If it is really a technical problem, I think the default locale could be cdo-latn, as it contains more entries than the cdo-hani entries.

To sum up, the cdo wiki should be separated into two scripts, namely

How can we move on this process? Who knows how to contribute something for this project?

How can we move on this process? Who knows how to contribute something for this project?

This request is stuck because it's hard to tell which direction is really good. Such requests are easier to satisfy if all of the following is met:

Currently, if I see correctly, this request doesn't satisfy any of these points, so it's nearly the hardest possible situation to be in.

This request is stuck because it's hard to tell which direction is really good. Such requests are easier to satisfy if all of the following is met:

This request is just helpful to let users less mix script localisation. Now translation of cdo has not been splitted. Some translated words was writtern in latn, while some words was in hani. As a result, we can see that Chinese charaters and Roman letters are mixed in the same page. Hani users and latn users are both reluctant to see this situation. If the translation of cdo can be splitted successfully, this problem can also be solved.

Currently, if I see correctly, this request doesn't satisfy any of these points, so it's nearly the hardest possible situation to be in.

LanguageConverter is not necessary in this request because we can keep the expressions of hani and latn same manually.

Can anyone please clarify whether the scope of this ticket is merely separating the UI translations of cdo into two UI language codes, or does it have anything to do with Min Dong Wikipedia becoming a multi-script Wikipedia?

Yes, a multi-script Min Dong Wikipedia is needed, namely cdo-latn and cdo-hani, just like Serbian Wikipedia, but manual conversion is needed, so don't give us any LanguageConverter.

The conversion is a single-to-multiple map from either direction, either from cdo-hani to cdo-latn, or from cdo-latn to cdo-hani, because there are too many homophones and homographs. e.g. from cdo-hani to cdo-latn, the homograph 行 can be pronounced as hèng or hòng depending on the context, while from cdo-latn to cdo-hani, the homophone mìng can be written as 閩, 民 or 明 depending on the context. There as a more serious problem for unorthodox writings such as 無年呆, 起動, etc, which may map to "abnormal" pronunciations. Therefore, automatic conversion is almost impossible, unless a language AI is really developed.

@Yejianfei
Thanks for the clarification.
+1 for multi-script Wikipedia.
Also, semi-auto conversion between Min Dong scripts is possible, although manual intervention is unavoidable at this moment.

All of two paragraphs above I wrote are not important. The only important thing is to make it a dual-script Wikipedia now according to the our consensus. Split the interface now, and change the language name from Mìng-dĕ̤ng-ngṳ̄ to Mìng-dĕ̤ng-ngṳ̄/閩東語, which is shown in the left-hand Languages sidebar.

Can this issue be solved by creating instead separate namespaces ("Hani:" and "Latn:") in the cdo wiki for articles that are not mixing scripts and not using autotranslation? And then keep the "/wiki/" path unchanged (so that it will work correctly for interwikis with other languages).
This does not man that the UI cannot be separated in its translation, however this means that namespaces should have distinct default language codes using distinct scripts; The "Hani" part would have the Hans<->Hant transliterator handled as a variant selectable by viewers, but not between Hans<->Latn and Hant<->Latn.
Some common pages would remain in the main namespace only if they support autotranslation (via the translate extension, or via templates based on PAGECONTENTLANGUAGE or UI language where applicable to generic banners)

Finally, the interwiki resolvers should be able to resolve

We have similar situation for Kurdish, we may soon have the same situation for Kazakh (if there's no simple 1-to-1 transliteration between Cyrl<->Latn), and other Turkic languages are concerned too with the transition to Latin. Similar issue as well in Africa (Berber languages using Arab<->Latn conversion which is lossy)

I would take my point, that do we really need to introduce hans to Eastern/Middle/Northern/Southern Min? As Yejianfei said above many times, hans was made for Mandarin (cmn), and probably suitable for Cantonese (yue), kindly suitable for Classical (lzh), works better for Wuu (aka Shanghainese), suitable for Sichuanese (though a code request is recently rejected by SIL due to concerns from Academical communities in Sichuan (itself, 囧rz)), and maybe somewhat suitable for Japanese (hehe) and Korean (another hehe), as picking a good translation for foreign languages' words won't be affected by different means of random single han character. However, there's really a cul-de-sac issue in pan-"Fujian+Eastern Guangdong+Southwestern Zhejiang" society that such "flexible" isn't existing in whole Min history and future, which is the reason that user aganist hans in his original request.

so "cdo-latn:", "cdo-hani:" become valid interwikis, and we can still have wikidata fed with linguistic entries in "cdo-hans:" and "cdo-hant:" when needed (when not using the exception dictionary)

I think it is a good idea to solve problems about interwiki links, so that articles written in cdo-hani can also be found easily in the left-hand Languages sidebar.

The solution, as everybody here has suggested in the past two years, is to create two language codes without splitting the site: cdo-hani and cdo-latn.

On this basis, people are allowed to see different interface texts. When you visit:

Translatewiki may need to be optimized accordingly. The sooner this proposal is implemented, the sooner we can provide the interface text of the Chinese characters version.

At the same time, Wikidata also needs to support the filling of cdo-hani and cdo-latn wiki entry names. Such Chinese characters and Romanized entries can be correctly linked in the database, and the links can be correctly displayed in the sidebar. The effect of the visit is as stated by Verdy_p:

Finally, the interwiki resolvers should be able to resolve

Up to now, Chinese character entries and Romanized entries rely on templates. With Wikidata, links will be more standardized. Mindong Wikipedia has 14,259 entries up to now. The sooner this proposal is implemented, the sooner we can use robots to import links between entries into Wikidata and manually resolve the remaining links (usually some categorie pages and template pages).

What are we waiting for?

I hope the interface of cdo-latn and cdo-hani in Min Dong Wikipedia will be separated soon. The situation that Chinese charaters and Roman letters mixed in the same page have troubled visitors and entry editors for a long time.

We need some questions answered:

There is no need to fallback, no need to have an autonym.
Just enable these two URLs rather than showing 404 pages.

That's it. Not that difficult. Just simply show me a creation page rather than a 404 page.

Why does it procrastinate for so many years?

Thanks for kicking the process off, but I have some questions.

Is it really good that cdo will have two names? We have several languages with two names (like Tatar), but it's not really good, and I'm quite reluctant about adding even more of them. There should one default.

Thanks for kicking the process off, but I have some questions.

Is it really good that cdo will have two names? We have several languages with two names (like Tatar), but it's not really good, and I'm quite reluctant about adding even more of them. There should one default.

It has already been said on translatewiki.

Yes, it is the only way. There is absolutely no way to have any automatic conversions between these two scripts. Therefore, give them two names. It would be even better to give them two Wikipedias instead of one.

These two scripts are completely incompatible, so please don't make any fallbacks. If fallback is required according to the MediaWiki rules, then fall back to English.

These two scripts are completely incompatible, so please don't make any fallbacks. If fallback is required according to the MediaWiki rules, then fall back to English.

Fallback to English is just the worst.

It seems more reasonable to fallback to one or the other script variant of Min Dong (Latin or Han) which is available. And then using Mandarin followed by Min Nan (for the Min Dong Han variant), or Min Nan and Mandarin (for the Latin variant). And all this before the last English fallback (only when there's no Min Dong, no Min Nan, and no Chinese at all).

(I used nan because it has Latin by default, and it's a good fallback for the use of Min Dong in Taiwan, where both Min Dong and Min Nan have official support, in addition to Simplified Mandarin)

Note also that the Min Dong language has three (not two) orthographies: you have to count the simplified Han as well.

So the "native" names (autonyms) should be:

The first link has been denied.

The second link has been rewritten and merged here:
https://github.com/wikimedia/language-data/pull/127

Let me do something for it.

Let me do something for both Min Dong and Min Nan.