Back in autumn 2015 we were struggling with compactions in large instances falling behind. At the time, we were using leveled compaction & a single instance per hardware node. To keep up, we increased the compaction throughput limit as well as compaction parallelism from the default settings.

We have since made several changes that reduce the need for such high compaction throughput: 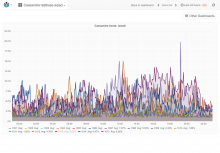 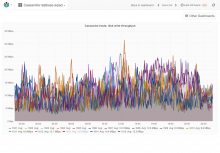 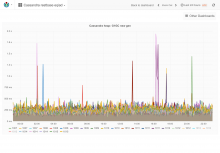 Read latency has only shown moderate movement so far. It is possible that the effect is overshadowed by the bootstrap on 1013. We'll find out once that is done. 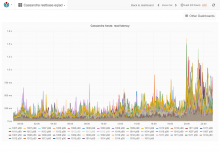 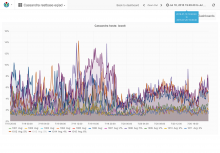 Overall read latency has dropped for the periods where the bootstraps were not ongoing: 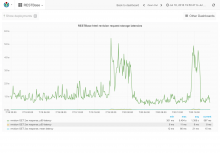 This means that this change addressed at least a part of T140286: Elevated 99p RESBase storage latencies latencies.

Compaction throughput / backlogging has not been an issue so far, but we should also keep an eye on that.

One more potential improvement I noticed while investigating this is that write IO is still relatively bursty, with no or few writes followed by a burst every five seconds or so. Our current trickle fsync interval is 30mb, which is rather large. I think it's worth lowering this significantly, perhaps to 8mb. All of those values are significantly above typical SSD erase block sizes of 256k.

The effect of this setting is to asynchronously (without blocking) write out dirty pages in a more continuous fashion. Blocking at the VM level would only occur once reaching vm.dirty_ratio. See https://lonesysadmin.net/2013/12/22/better-linux-disk-caching-performance-vm-dirty_ratio/ for more background.

I think it is worth trying this in addition or even as an alternative to trickle_fsync, considering how easy it is to apply temporarily.

The instances on 1012 where all restarted with trickle_fsync disabled, and vm.dirty_background_bytes was set to 24M starting from ~15:54, completing at 16:06.

On the whole, vm.dirty_background_bytes looks better on this rather limited experiment. Both have seen relatively little compaction activity during this time, so it might be interesting to note what happens when that is not the case. I need to bootstrap an instance into this rack (1013-c as part of T134016: RESTBase Cassandra cluster: Increase instance count to 3), which should provide the opportunity to do just that...

Based on the limited data so far, read latency seems pretty much unaffected on either host: 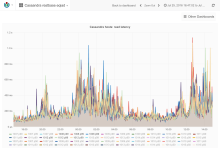 In theory , dirty_background_{bytes,ratio} seem like the better solution for the even-write problem, but there might still be some role for fscync in that it paces the producing process before causing major stalls. This would only happen during extremely heavy write activity, once dirty_ratio is reached.

The last of the changes associated with this issue have been applied to the production cluster; I think we can close this now