Task to collect information on kubernetes worker nodes hanging. For each node, collect:

Found this stack trace in dmesg for tools-worker-1018:

Repeats over and over again

First report of the error is at

A few notes on this. We saw iowait spike considerably and diamond appeared to be flushing stats during the incident even though the host itself was unavailable for investigation. Sessions would possibly terminate infrequently and cut out shortly thereafter.

iowait for all workers during incident 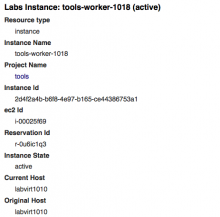 so, I just saw a warning from high iowait on worker-1015. I tried to ssh in to no effect.

8:57 CDT according to my irc client

iowait had actually been having issues for awhile I believe, and the real kicker is syslog was hosed up so there seems to be no recent logs.

also of note from 1015 atop stopped recording at the same time as:

note we are upgrading all kernels to be consistent T140611

I caught 1005 in the act! It got a pod scheduled on it, but was stuck in Pending. I was able to ssh in, and docker ps was hung. It's still hung (even after a docker restart) and it has high iowait too.

docker is a zombie process!

Can confirm, it's got:

and similar in console.

I lookeed at iostat graphs and see big spike, but only for vda and dm-0. You can find out what corresponds to 'dm-0' by doing:

In this case, the output was:

So dm-0 is actually:

Which is the lv on top of which docker mounts the loopback devices that are then used by the containers.

This makes me suspect that the extra overhead from the lvm loopback driver is what is causing these issues (see T141126).

@mark pointed out a couple of things:

Note that it's owned by root - it has in some ways broken out of the container it was in, but only by killing the docker daemon.

The current working hypothesis is:

The rest are still on loopback, and 1005 is still vaguely stuck and depooled.

I've also disabled puppet on the nodes with loopback on, so we don't end up automigrating. Easiest and cleanest way to migrate is probably to just delete the nodes and recreate, and this also gives people node creation practice :) I'll do more next week and make others do more as well.

I've now moved all of the worker nodes to use direct-lvm, let's see if the hangs recur.

I'm going to close this just now since T141673 covers the general case, and we moved to direct-lvm.

• yuvipanda closed this task as Resolved.Aug 10 2016, 5:42 PM
Phabricator_maintenance removed a subscriber: • yuvipanda.Jun 7 2017, 6:41 PM
Bstorm mentioned this in T217086: Investigate why the new Son of Grid Engine grid landed in a worse state when NFS was filled than the old Sun Grid Engine grid did.Feb 25 2019, 11:08 PM
Log In to Comment
Content licensed under Creative Commons Attribution-ShareAlike 3.0 (CC-BY-SA) unless otherwise noted; code licensed under GNU General Public License (GPL) or other open source licenses. By using this site, you agree to the Terms of Use, Privacy Policy, and Code of Conduct. · Wikimedia Foundation · Privacy Policy · Code of Conduct · Terms of Use · Disclaimer · CC-BY-SA · GPL