suddenly these popped up

but dbstore2002 was up and running

Monitoring stopped collecting information at that time, too: 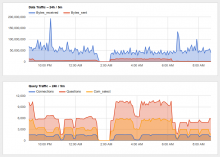 Edit: (--skip-slave-start is normal, it is just like that when it is manually started)

First of all; thanks for attending it. It didn't page, which means it was not urgent. Both for being being a dbstore and not being at the primary datacenter. So you made a good call. If you had called me, however, it would also not be a problem; you wouldn't have woken me up.

Look at the error, though: CRITICAL slave_io_state could not connect it doesn't say io/SQL is stopped, it says it could not connect. That usually means that the server is down, or up but the query timed out. For example, it happens if a sever crashes- where the process is up, but the database is still recovering and not accepting new connections. However, checking the uptime, the server itself didn't crash.

Another reason where I saw this happening is if there is a long-running write transaction and STOP SLAVE is executed. In that case, SHOW SLAVE STATUS queries fails as they have to wait for the transaction to finish. I have only see this happening on TokuDB hosts (T109069#2518719 which we are getting rid of).

I do not see any special event on the log at that time; however, it seems that not only SHOW SLAVE STATUS our monitoring at the time also stopped answering between 1:33 and 2:13. With that in mind, I have 3 potential explanations:

Those dbstore hosts have lot on their plate (replicating from 8+ hosts + eventlogging), but in general they are not critical for the operation.

--skip-slave-start has nothing to do with this issue; when a sever is started manually (for example, after an upgrade), that options is always used because we cannot restart replication until we execute mysql_upgrade. So we start the server with replication stopped; then we start the slave manually with start slave. This cannot cause any issue, because in the event of a crash/restart, this option is not there by default, and replication would start automatically. To give you an idea of how common this is; all servers, including those in production will have this on the run options, except those that have crashed or restarted after upgrade.

Again thanks for responding. I have one last question; according to the logs; mysql started responding a few minutes later. Did you run any command that could have done that, or did it start providing service again on its own?

The fact that there was not slave lag after the fact happened probably means mysql server itself was up and replicating without problems (not frozen) and it was a mere query pile-up pointing more and more strongly towards TokuDB (it did strange things like that in the past).

I would keep this ticket open for a while, in case it happens to be a malfunctioning disk or related to prometheus rollout; but right now all points to the "slowly replacing TokuDB with InnoDB compressed solution".

Thanks for the detailed explanation. No, i did not run any command, it must have started by itself again.

Disk replacement is handled on a separate task; no more to do here.