One of the sources of cache hit-rate inefficiency is one-hit-wonder objects. These are objects which are cacheable and get cached on usage, but tend to only get hit once in a blue moon (or once ever). They're still going to evict some other object based on LRU in a tight cache (especially our frontends), and that's usually the wrong choice. The hard part is "predicting" that a missed object will end up being a one-hit-wonder.

The first and most-general approach to this, that we've discussed (mostly offline from phab) in the past is to employ a Bloom Filter. The filter itself would be a fairly large memory object, but small compared to the actual dataset, and would allow us to tell the difference between "first miss ever" and "a miss on an object we've missed before", and effectively prevent caching an object the first time it's ever accessed (waiting for the second access to cache it). I first stumbled on this idea in: https://people.cs.umass.edu/~ramesh/Site/HOME_files/CCRpaper_1.pdf . @ema found this that's probably relevant too on Cuckoo Bloom filters being a better implementation choice: https://www.cs.cmu.edu/~dga/papers/cuckoo-conext2014.pdf .

I had a new idea today, though:

While the Bloom type approach is more general and works for a single cache layer, we already have additional metadata available to us in our frontends (the smallest caches, where this matters most) because of our layered caches. All requests passing through our frontends inevitably go through one or more backend cache layers with much larger storage size. We communicate the miss/hit status from the backend to the frontend on response in the X-Cache-Int header. Therefore we could potentially implement logic in our frontend VCL of the form "If the miss-fetch from the backend indicates the backend also missed, do not cache the object in the frontend". On the second fetch, it would be a hit in the backend (from the earlier miss->fetch->store there) and then also get cached in the frontend as a twice-seen object. This has an upside versus a local bloom filter in each frontend, too: the frontends are effectively sharing (at no cost) the twice-seen dataset (so if it's seen for the first time ever in Frontend1, but Frontend2 had seen it recently, it wouldn't get counted as one-hit-wonder, like it would with local Bloom filters).

There are pragmatic bits and pieces to sort out for this idea:

This would probably be superior to local Bloom for frontends, and about the same as local Bloom for intermediate backends where chashing is already in effect. This approach doesn't work for backend-most backends which talk directly to the applayer; they'd need a real filter to solve their own one-hit-wonder problem.

I have been working for some time with Ramesh on cache admission policies for Akamai workloads, and I can contribute the following takeaways

Recently, we have been combining ideas 2. and 3. using an admission probability that is larger for small objects and (much) smaller for large objects. This turns out to be very effective but requires tricky parameterization. We've been experimenting with automatically and continuously adapting the parameter to the request traffic using some math models.
(This worked very well on Akamai production workloads, see a tech report here http://reports-archive.adm.cs.cmu.edu/anon/2016/CMU-CS-16-120.pdf)

I'm happy to run a few simulations to compare some alternatives once T128132 is ready.

I'd really like to include BBlack's new idea of exploiting the backend X-Cache, but I feel like this would require a huge simulation including all of WMF's traffic for a week or so (to simulate all of the backend). Therefore, I'm not sure how to incorporate this into a comparison - but I'd really like to.
Maybe the only way to do this is to prototype a few variants, deploy and do A/B testing? Other ideas?

(With regard to the second question in this phabricator item's description: yes (obj.ttl=0s + beresp.uncacheable) is correct. We've been experimenting a lot with Varnish + admission control, and that's what worked very well for us.)

frequency-based admission - admitting an object after N requests - often works much better when not only checking for one-hit-wonders but also two-hit-wonders etc. I have often seen optimal N values between 4 and 16 - though, I cannot yet say what works best for WMF's workloads. (N=1 is easy to implement when one chooses Bloom filters, but N>1 requires more work as "counting" Bloom filters are a lot harder to manage.)

Interesting! I wouldn't have expected such high numbers. In any case, our X-Cache data happens to also count hits, so we could extend it to "only cache in the frontend when the backend reports hit/4 or higher" and similar, experimentally.

We already have a very naive and static version of this on the upload (image) cluster - we just have a conditional in place that refuses to cache objects in the frontend if they're >= X size. X was traditionally 32MB. I raised it to 50MB a while back, and we experimentally observed that it didn't help OHR at all (as I guess we should've expected, but we have so little data about our dataset, it's sometimes nice to verify!). @ema and I were just talking yesterday about going back the other direction now and experimentally lowering it until we see a positive impact on frontend OHR, but we're in the midst of other changes right now, so it's put off for a better window to see results clearer.

Tying the X-Cache idea together with the tuneable hitcount and size from the paper, we could look at something of the form if (hc / (os * X) < Y) { uncacheable; }, where hc is backend hitcount, os is object size, and then X and Y are our tunables. Probably slightly more magic than that on the object-size front, but that would be the general idea.

I finally got some simulation results. 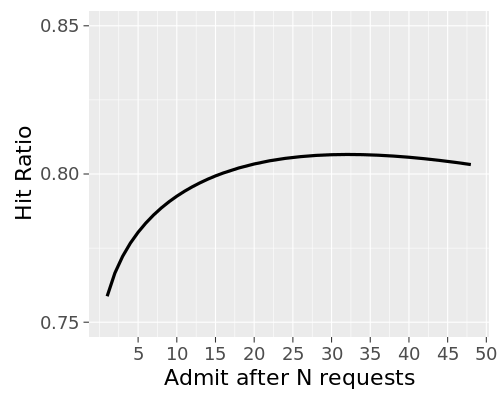 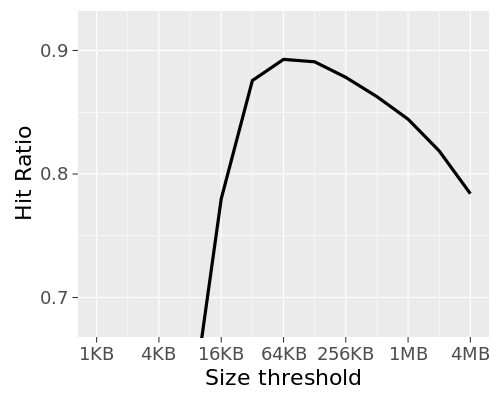 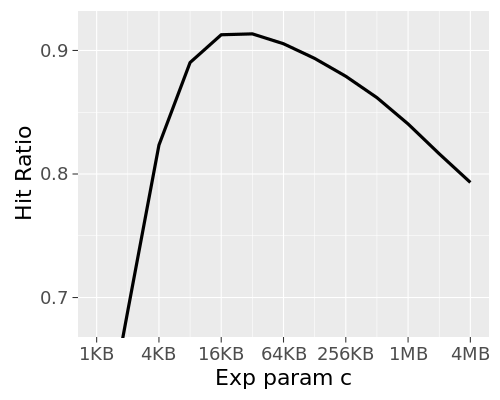 Happy to take input what to simulate next. Each simulation run takes about 48h.

I can share the simulator code, if there's interest in it. It's just a bit messy and I'd like to clean that up before putting it up on github. I'm happy to mail an archive with the current version, though.

I'm happy to share a vmod for Filter and Exp-size (for Varnish 4.1). Simple implementation (using probabilities instead of bloom filters, no memory overhead, CPU overhead is a few instructions).

We also have a self-tuning variant of the Exp-size policy (so every cache finds the optimal c by its own and adapts it over time). This has some overhead, though, and my current implementation makes a few changes to Varnish code. If there is interest, I'm happy to try it.

@Danielsberger Somehow I missed these updates a month ago!

In the meantime, what we did put in place for cache_upload a while back (based on rough guesswork and tuning) was a combination of:

Both of these helped, and we're currently seeing an average frontend hitrate of ~85.5%, so that roughly jives with the ballpark of your numbers. We're combining the good effects of two filters here, but also using slightly more permissive filters than what the graphs show as optimal, and there's more memory available.

The exp(-size/c) filter sounds really interesting, as it could be fairly low-complexity way to see some good gains. We might be able to crop out some of its edge cases too, by combining it with some fairly permissive pre-filtering (e.g. N=3 + Size=4MB) and then letting it take over the complex tradeoffs in the middle ground.

Could you run your same simulation as above, but at 100G and 200G for total storage size? I'm curious what the shape of the change is (both in terms of achievable hitrate, and in how the optimal parameters vary).

Ok, here are the new results for cache sizes between 50GB and 400GB. For now, I only looked at the Filter and Exp admission policies.

Disclaimer: The two week memory trace might be too short to trust the large-cache results (>256GB) results. 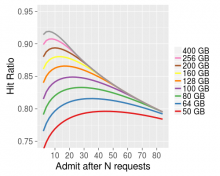 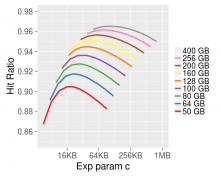 A simple linear fit on this log-log scale

gives us the following parameters

My simulator code is now at github/dasebe/webcachesim.
To reproduce these plots

Here's a graph of the hit ratio for various cache sizes.

It seems to me that this tells us: investing in a better admission policy pays off more than accurately sizing the mallocs to squeeze out capacity.

@Danielsberger - Fascinating stuff, thanks so much for running all of this data! We're kind of swamped in various things right now (varnish4 transition and various nginx/openssl changes), but I think maybe next week we can start rolling out some changes that will let us do some testing on these policies and tunables.

This ticket should be a talk, really.

Change 477573 had a related patch set uploaded (by Ema; owner: Ema):
[operations/puppet@production] cache_upload: hfp on frontends for large objects except for exp

Change 477573 merged by Ema:
[operations/puppet@production] cache_upload: hfp on frontends for large objects except for exp

Reason:
CR expired. Partial implementation, we never got around to seriously work on the exp admission policy.

Here I'd like to look at how the exp policy did in comparison to our straightforward "static" policy based on object size (we cache objects smaller than N bytes, with N=262144).
To make sure we compare apples with apples I have restarted varnish-fe on the instances were the experiment was running so that we start with an empty cache, and I have done the same on another instance in the same cluster using the "static" policy to compare against. The cache-hosts-comparison dashboard helps, I hope, visualizing the differences between the two cache admission policies.

Better on cp2029 (static) compared to cp2027 (exp) during the cache warm-up period (about +4%). Once the caches started filling up both policies gave comparable results, with static still doing better (about +0.6%).

Transient memory
Much higher on exp than on static due to the higher frequency of hit-for-pass, up to ~1000M vs ~40M.

Hitrate results are very different compared to text: here we had better results on cp2028 (exp) compared to cp2030 (static) during the cache warm-up period (about 3%). Once the caches start filling up static outperforms exp (also 3%).

Much higher on exp, ~1.5G (spikes excluded) vs ~120M due to the higher frequency of hit-for-miss.

With the rate and base settings used during the experiment, the exp policy caches less than static on both text and upload, explaining the differences in frontend hitrate, and the significant differences in cache/transient memory usage. We should make the parameters configurable in hiera and further tune the policy till we reach at least the same performance of static, and hopefully improving it.

The swap of Traffic for Traffic-Icebox in this ticket's set of tags was based on a bulk action for all tickets that aren't are neither part of our current planned work nor clearly a recent, higher-priority emergent issue. This is simply one step in a larger task cleanup effort. Further triage of these tickets (and especially, organizing future potential project ideas from them into a new medium) will occur afterwards! For more detail, have a look at the extended explanation on the main page of Traffic-Icebox . Thank you!