User CSS and some of the site CSS loaded on Special:Preferences
Closed, ResolvedPublic
Actions

I'm having trouble reproducing this issue. https://de.wikipedia.org/wiki/User:Bawolff/vector.css is not loading for me on Special:Preferences. Is there anything different or special about your account that might be different from mine that would cause this issue?

Strange. I updated my CSS, but on Spezial:Einstellungen the previous version is loaded.

The screenshot shows that the style node is there, but still has old content (starting with table.metadata), and also shows that my personal styles for Echo are applied. 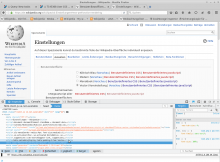 As far as I can tell, it seems like what happened is that before that revision site.styles, user.styles, and noscript were always passed to $rlClient->setExemptStates() in OutputPage::getRlClient() and then manually loaded after filtering in OutputPage::buildExemptModules(). After that revision, they are only added to $rlClient->setExemptStates() if they would be loaded after the server-side filtering, meaning that if the server-side filtering excludes them they are able to be loaded as dependencies by RL on the client side.

@Anomie Confirmed. This can only happen when javascript that already made its way (through approved path ways) to the client. This approved script can't itself be a user or site scripts, as those are safely excluded on the server. It must be coming from a core or extension module that is already loaded on the preferences page.

This seems odd but there are some good use cases for this. For example, VisualEditor has a run-time mw.loader.using().always() call that waits for the site and user module to complete so that they have an opportunity to register custom plugins or change configuration before everything gets set in.

In practice this is more about execution order than lazy-loading, since those modules load on all pages by default.

I suspected at first that maybe Echo is doing something similar (which, unlike VisualEditor, is loaded on the preferences page). And contrary to regular pages, on the preferences page such code wouldn't be riding along the existing fetch for the user module, it would cause it to begin loading in the first place.

However, turns our that's not the case. First, let's understand what these recent changes did in the context of this issue (user.styles module loading on preferences page).

The reason user.styles is being loaded on the preferences page is as follows: mediawiki.js contains some tracking code to emit an internal event signalling that all initially loading modules have completed. This code enumerates all modules in state loading and registers a success and error callback. When all callbacks have been invoked, it emits mwLoadEnd.

This very code triggers a dependency resolution on the user module. While it does not proceed to load user scripts (since the state machine claims they are already on the way), it does "discover" that user.styles is a dependency but not yet being loaded, and as such fetches it on demand.

(Not in the public commit message.) After applying this commit, observe that user.styles no longer gets loaded. Verify through mw.loader.getState('user.styles'), or by checking the network panel in browser dev tools; without this patch there's an outgoing request to load.php?modules=user.styles.

This was fixed half a year ago, we had (I think) two security releases since then, so this task can probably be made public?

This was fixed half a year ago, we had (I think) two security releases since then, so this task can probably be made public?