The CompletenessTest was my attempt at getting a basic code coverage report using run-time inspection instead of static instrumentation.

It was never fully developed, remained somewhat unstable, isn't used by Jenkins or otherwise enabled or encouraged, and its results are not publishable, either. (Only works locally as on the Special:JavaScriptTest HTML view).

The "export" feature for Special:JavaScriptTest introduced in 2014 for Karma and TestSwarm (ba50b3255) lacked support support for loading the CompletenessTest. And when the regular "skinned" mode was deprecated and, eventually, removed last year in 0f9e4ca0f it essentially hasn't been used anymore as far as I can see.

From a Git-wide search I see that various Wikibase repositories still have references to it, so I won't remove it just yet. But it'd be good to know for sure if and how it's being used there. There's no rush behind its removal, but if it's not being used, that I'd rather we remove it from core. 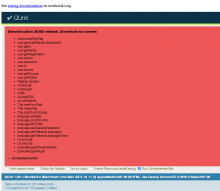 Wikibase does not actually use it as far as I know. I added basic support to some modules, but didn't even run it myself regularly.

This proposal is selected for the Developer-Wishlist voting round and will be added to a MediaWiki page very soon. To the subscribers, or proposer of this task: please help modify the task description: add a brief summary (10-12 lines) of the problem that this proposal raises, topics discussed in the comments, and a proposed solution (if there is any yet). Remember to add a header with a title "Description," to your content. Please do so before February 5th, 12:00 pm UTC.

@adrianheine @thiemowmde Can you tag a release for data-values/value-view so that the next Wikidata build will include these changes?

@adrianheine @thiemowmde Can you tag a release for data-values/value-view so that the next Wikidata build will include these changes?

This is now unblocked from Wikidata. Next step is removal from MediaWiki core.