Ensure that user interface elements don't break visually when translated to other languages.

This can be probably merged/connected with T133256, but based on the title and the description it is unclear which is the scope of the current ticket: (a) the language selector in the dashboard or (b) the whole tool.

There are other problems in UI with localized messages being longer than expected, but I'll address what's reported in the description. Messages used to say "From any language" and "To any language" which was translated to be too long for our language selector to handle. Message was shortened (T175010) afterwards to "All", which became "Tous" in French. 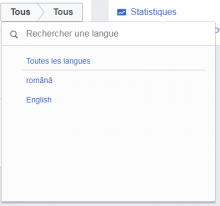 Even if message stayed "From any language" and "To any language", after T169967, element from description would look like this: