When DNS lookups are unavailable for even very short periods, several nodejs and/or restbase-related services seem to fall into a pattern of persistent failure, even long after DNS service has returned to a normal state. Usually only service daemon restarts seem to fix this state. It's almost as if they persistently-cache the failed hostname lookup in some indirect way.

The actual problem here is an unknown, and I don't even have any good working theories.

There are big drops in *action* API backend requests and huge spikes in latency around both times: 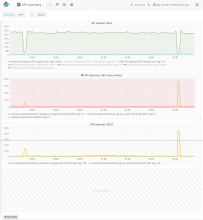 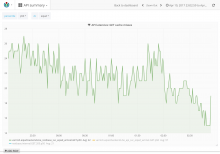 The same action API latency spikes were observed by RESTBase: 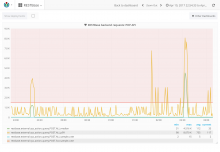 The rate of external requests hitting RESTBase & served from storage did not change at all during the same time: 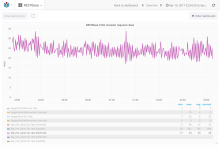 Going through the rates and latencies of REST API end points, it seems that primarily end points that directly or indirectly hit the action API (for example, via Parsoid) slowed down. Others, like pageviews, math or citations, did not change in rate or latency.

Overall, the data points towards high latency in the action API after the DNS de-pools, especially of the median latency. There does not seem to be a slow-down in node DNS resolution in general, as evidenced by the lack of issues between node services (like mathoid, citoid, aqs).

Do we know which exact URLs failed in icinga? If so, we could double check if those entry points do indeed rely on the action API. We got mobileapps and RB alerts on action API outages before, so this looks very likely, but it would be good to eliminate the possibility that one of the other checks failed as well.

One thing that I don't have an explanation for is the eventlogging-service-eventbus issue. Afaik this is hitting the python eventbus service, which should not depend on the action API.

FWIW - I did the same depooling (for reinstalls) in codfw this afternoon, and there was no impact in that case. So this seems to also be eqiad-specific (but that could be just an effect of all the real user load being in eqiad - maybe the same problem, whatever it is, happens in codfw but it's a non-issue due to light load)

Lets perhaps tackle T123854, so that icinga also keeps an eye on the action API?

Regardless, after we're done with the current codfw switchover/switchback, I think we should get some relevant parties lined up to look into the appropriate logs/traffic in realtime and test another recdns depool in eqiad and investigate this a little further experimentally.

While we'll work on improvements that make this less-likely in the first place in various DNS infra tickets like T171498 , and we're happy to help debugging this with someone, ultimately this is an applayer problem independent of our DNS infra, so I'm moving it over to the Watching column.

The previous comments don't explain nowadays who or what (task?) exactly this task is stalled on ("If a report is waiting for further input (e.g. from its reporter or a third party) and can currently not be acted on") as T123854 was resolved in the meantime. Hence resetting task status, as tasks should not be stalled (and then potentially forgotten) for years for unclear reasons.