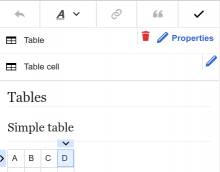 Might be a side-effect of my changes to buttongroups in toolbars (d22d2331), somehow.

That said, is there an image somewhere of what this is supposed to look like? 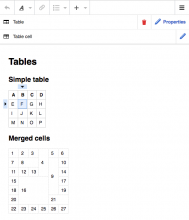 Ah, I see, it's more the spacing on the entire row than the icons themselves.

I think it's actually maybe Volker! There were several commits in the last release cycle or two which involved refactoring padding on ButtonElement, particularly 99361c772c which had some impact on non-labelElement buttons. It's enough of a pain to force in a different version of OOui that I haven't tested this, but it looks more plausible.

Anyway, working on a fix now.

Yup, I haven't touched toolbar tools (yet), but as there are probably a few ButtonElements scattered here and there my changes might have been part of the cause. Going to help with reviewing…

My patch applies some custom padding to non-labelWidget buttons in the header of a few places in VE. I'm not sure if this would be better placed up in OOui itself; I can move it into a patch for that, if people think that's better.

From first reaction, I'd be with your comment – being inclined to have it centralized in OOUI as we've got a collection of toolbar styles and I don't see why we wouldn't want to have this generalized (without looking in all possible implementations).