Chris - Can you upgrade the RBSU (and whatever other firmware) to the latest rev on lvs1007 please?

Context - I'm having issues getting the network adapter to work on this host (and others like it, but experimenting on just this one for now). @fgiunchedi managed to get past the same issue by disabling "HP Shared Memory Features" for the NIC(s) somewhere in the RBSU menus. However, on these hosts there is no menu-based RBSU on the serial console (apparently it varies by model and rbsu firmware rev, etc), only the CLI with the SET/SHOW commands. There's no such option available in the CLI stuff. There are hints online that later versions of RBSU might either have the CLI option for this or enable the menu-based RBSU with fuller control. I've already tried disabling Intel VT-d (via RBSU CLI) and SR-IOV (via NIC Ctrl+S setup) but that's apparently not enough to get past this ethernet driver crash issue.

This is a deep rabbithole problem that's blocking a lot of other work indirectly (e.g. decomming old LVSes in eqiad, and blocking indirectly the ulsfo hardware deploys and asia cache DC as well).

So attempting to upload this over the web to the gui mgmt interface times out. It may work a bit better if done locally from eqiad. I'm pushing the file to my home directory on iron, so Chris can pull it from there.

The bios update that I have has failed to install....looking at another solution.

I've contacted Dasher about this system failing to take updates, will update task when I have more.

So, the bios and ilom have been updated to the latest version, but the firmware on the NIC can only be flashed via the HP SPP iso boot.

Created the bootable img using the HP utility provided in the iso. It is a Windows software and had to borrow from a family member. Booted the Service pack and the updated the needed f/w. Server rebooted @RobH please verify

Ok, now we are in a bad state. We are trying to remotely enter the Bios, and get the following when telling it to enter bios on vsp:

We need to have @Cmjohnson connect a crash cart, enter the GUI bios setup, and confirm the following:

09:39 < bblack> : somewhere in bios setup, there's an option (related to NICs? but I have no idea what menu it might be under) named "HP Shared Memory Features"
09:39 < bblack> : which needs to be disabled

Also please double check all serial redirection settings, so it redirects to 2, sets physical com port to 1, and the like. We should be able to load the graphical bios settings screen via vsp if all settings are correct.

Also, the NIC firmware update only applied to ports 2+3, but not ports 0+1. I don't suspect NIC firmware level was a leading candidate for the fix anyways, but having the ports at different firmware levels sounds particularly problematic on its own.

Ill work with Chris as needed, and once PXE booting works, will kick it back to @BBlack.

This is an HP gen8, so I cannot actually load the bios remotely and check the PXE settings for the cards. This issue sounds like the NIC card bios doesn't ahve PXE enabled for the nic port plugged into the network switch.

Please investigate and check bios settings for the card, and confirm if they needed tweaking.

I did the NIC card bios check last week when I first found the PXE booting problem. It is enabled there. My guess is either something else in BIOS settings got changed that affects this, or somehow disabling "HP Shared Memory Feature" with the new NIC firmware also kills the PXE functionality indirectly (which would be pretty awful, and might mean we have no solution but to move to stretch installs).

I checked the BIOS Settings, everything is enabled, the standard boot order is correct
1, CDROM

I also verified PXE was still selected on the NIC card

@BBlack: So to confirm, if we disable the memory share, it won't pxe boot. If we enable it, it will pxe boot?

I don't know, I hadn't tried re-enabling the memory sharing stuff. All I really know is the sequence of events last week was approximately:

My suspicion based on the above, is that for some convoluted reason, "HP Shared Memory Feature" being enabled might be a pre-requisite for RBSU+NIC to work together on PXE booting?

@BBlack @RobH I went through and re-verified all the settings, this generation does not give an option of UEFI or Legacy like the new generations. The bios is very basic. I enabled the HP Memory Share. Let's see if that works

I think @Cmjohnson said before that they're at different revs because they're different pieces of hardware (onboard vs card), and those are the latest revs for each, respectively.

Well, my thought about the multi function mode being set incorrectly doesnt work. I make it match all the other ports and it still doesn't pxe boot on eth0. Setting memory enabled on all ports to see if it pxe boots.

All ports have had the memory sharing set to both disabled and enabled, with attempts to PXE boot via eth0 under each setting. It never shows the actual PXE boot splash and attempt to contact dhcp, instead it skips right to disk.

If eth3 (the second NIC) has its boot mode set to pxe, it will show a pxe dhcp attempt. It is odd that eth0 suddenly will not.

Ok, so there is something wrong with lvs1007 network firmware/settings.

lvs1007 boot order is missing the network device option. When selecting it in the one time option, it never actually shows a PXE/DHCP post screen, and bypasses it to the disks. It should show up in the normal boot order menu, that it isn't seems to denote that it isn't being detected. Perhaps the firmeware load is in a bad state or failed. @faidon suggests we attempt the firmware load a second time on both NICs in lvs1007 to see if it resolves the issue.

If not, we'll have to have Dasher/HP send a tech out to work onsite with @Cmjohnson to resolve this issue. 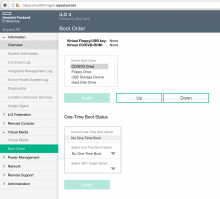 As you can see on lvs1008, which has not had firmware updated, it shows the network device 1 in the boot order, as well as one time options. 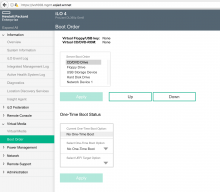 Per @BBlack's request, I've done a show config script on both lvs1007 and lvs1008 for comparison.

The only difference is the virtualization is flipped on (immaterial) and lvs1007 lacks the line: SET IPL PXE 5

Googling SET IPL PXE 5 shows a lot of issues where folks lack PXE booting, even when it should do so. Nothing seems directly relevant to our specific issue, since they have that line in their config and we lack it on lvs1007 for some reason.

Can we reset lvs1007 to all factory defauts and see if it has the nic show up as a boot option then? (We're not sure what got changed over time, Brandon suggests that something was different in bios, and we can see that lvs lacks 'SET IPL PXE 5'

For the record, one cannot simply enter 'SET IPL PXE 5' in rbsu it doesn't like it: (105):Invalid Parameter(s) - Invalid String specified

I think the SET IPL PXE 5 is also a red herring, as it usually seems to mean pxe is enabled on a port other than eth0. Our issue is the network device doesn't show in the boot order menu at all!

I suggest resetting bios to defaults and see if that fixes it. If not, attempt reflash of the nic firmware as well as bios, and see if that resolves it. If that doesn't, we'll need to bring in Dasher/HP.

@Cmjohnson went ahead and reset bios settings to defaults, and after power cycling the server, it hasn't resolved the network device not showing in the boot order.

Next step is to reflash the BIOS firmware as well as both NIC firmwares to the newest versions (a second time, even though they may already be on them) to ensure nothing screwed up during that process.

Swapped the NIC card with a new one that HP sent.

I gave in and tried a stretch network install on lvs1009 for comparison. I didn't make any bios/firmware changes there, just used RBSU console to onetimeboot netdev1, power reset, vsp and watched the installer. Hardware DHCP->PXE worked and loaded the installer, but the installer failed on network stuff (like jessie). Installer dmesg shows multiple driver panic on bnx2x . I just copied the end of one crashdump and start of the next for the metadata here:

I figured as a next minimal testing step on lvs1009, should just go into the ethernet firmware (Ctrl+S) and try disabling SR-IOV and/or HP Shared Memory Features, without any upgrades, if possible. However, the firmware/bios levels currently on this host doesn't work well enough with VSP to do that remotely (it doesn't process arrow keys correctly, you can only drill into the first item of each menu and toggle whatever's there...).

Got arrow keys working in Ctrl-S (thanks @fgiunchedi !) by re-setting the local terminal. There is no "HP Shared Memory Features" prompt in the current NIC firmware to disable. Went ahead and disabled SR-IOV on both cards and tried another netboot, still fails to bring up the interface in the stretch installer as before.

Reason:
Fixed in /etc/udev/rules.d/70-persistent-net.rules instead.

Gave up on these machines!