Assigned To
None
Authored By
Tags
Subscribers
View All 13 Subscribers

Full list of Wikibase code libraries and when the most recent release happened, as of 2017-08-12:

Candidates for an urgent release in reverse chronological order:

Mentioned Here
T172916: [Task] Remove as much unused and obsolete JavaScript code as possible from all Wikibase code bases
T173818: [Epic] Kill the Wikidata build step
T174922: Decide what to do with Wikibase JS-only libraries regarding the build/deployment of Wikidata code
T177087: Make Wikibase-related JS libraries npm packages and include them as git submodules in Wikibase.git instead of installing as PHP libs using Composer

Honestly, I think it's part of very bigger problem and it's large number of libraries that we have making it practically unmaintainable, I recently discovered a few more libraries, lots of time I don't have access to merge PRs because it's in another organization and I don't even know use case of most of them or for example, the difference between WikibaseDataModelJavaScript and DataValuesJavaScript. Cleaning them up, consolidating them into one organization (some are in wmde, some are in Wikidata, some are DataValues, some are in gerrit, some are in Wikidata-lib, etc.) and making a catalog of them to make onboarding and offboarding of developer easier, and maybe merging some of them are huge technical debts that will bite us in future.

I partly agree, but note that what you said is not covered by this ticket.

When writing subtasks of the kill the build ticket I drew the dependencies of all of our libs, see here attached: 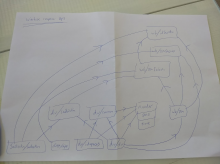 This might help us visualize what is going on :)

Thanks for bringing this up @Ladsgroup. The thing that's been bugging me the most is that for more as a fairly new person it is not really clear which of all of those libs are something I should feel responsible for, and what. Having this information better included in on (and off-) boarding process is something that should definitely happen, IMO. I am mean both the more "administrative" part (give/revoke people all required permissions), but also the more "awareness" part, i.e. to make new folks aware and familiar what are the components, where they are, what for, etc.
The number of all those libs, and the fact of them being scatter around many places is clearly not making things easier. It could still be fine though, if the stuff was made clear IMO.