I have a long-standing bot user (DasyBot) on Wikia, which has been active on its original wiki (Coasterpedia) for 2½ years. The last successful edit I made with it was on July 16.

I now have this bot extended to three other wikis on which I am an admin, for immediate need in one case and in case of future need on the others. However, trying to log in via AWB now results in an error message saying that this is "not an authorised bot"(!?!?), despite the user's bot flag (and a CheckUser page on two of the four wikis) saying otherwise.

(edit) See this thread on Wikia Community Central for further details. By adding an "AWB/CheckPage" page to the two wikis which didn't have them, and a Bot template to all four user pages, I have managed to get AWB to run without disabling itself when I log in; but I still am not allowed to use it in bot mode, and without this there's no point in using it at all.

(Incidentally, why can't I assign a "Wikia" tag to this report?)
I suspect this is a bug introduced in a recent update. Perhaps the code is making the false assumption that all MediaWiki wikis are in the Wikimedia Group, and that any bot which is not authorised on Wikimedia must be blocked? Could another check be added, to ensure that the wiki to which login is being attempted is actually a Wikimedia wiki, before imposing Wikimedia security policies?

Mentioned In
T203316: Check page failed to load on Wikia/Fandom

DasyBot is present on the checkpage: http://rollercoaster.wikia.com/wiki/Roller_Coaster_Wiki%3AAutoWikiBrowser/CheckPage
Can you confirm that the error did not appear with your personal account, Evilquoll, that is whitelisted on the check page too ?

The bot flag onwiki is kinda irrelevant for automated editing. It's only used to know whether the user should have things like being able to do higher api count requests etc

And no. It doesn't make any assumption/dependency on wikimedia wikis as to determining the "bot status"

(Incidentally, why can't I assign a "Wikia" tag to this report?)

Because a wikia tag doesn't exist in our phabricator. We don't track/tag wikia bugs specifically

What versions of AWB were you on when it last worked?

but I still am not allowed to use it in bot mode, and without this there's no point in using it at all.

Do also note that Wikia are using what is effectively a fork of MediaWiki, that is very much unsupported "upstream" as it's 1.19 which dates from 2012

They make a lot of independent modifications

:please look at https://en.wikipedia.org/wiki/Wikipedia:AutoWikiBrowser/User_manual#Bots if you have trouble
attached screenshot 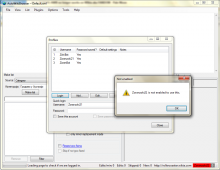 Reedy removed Anooprao as the assignee of this task.Aug 27 2017, 8:54 PM
Mainframe98 renamed this task from AWB no longer works on WIkia aka FANDOM to AWB no longer works on Wikia aka FANDOM.Sep 1 2018, 1:02 PM
Mainframe98 mentioned this in T203316: Check page failed to load on Wikia/Fandom.
Reedy closed this task as a duplicate of T202106: Wikia only supports TLS 1.2.Sep 1 2018, 1:03 PM
Mainframe98 added a parent task: T169407: [AutoWikiBrowser] Wikia related tickets.Sep 1 2018, 1:03 PM
Mainframe98 removed a parent task: T169407: [AutoWikiBrowser] Wikia related tickets.
TerraCodes added a subscriber: TerraCodes.Sep 6 2018, 3:28 AM
Log In to Comment
Content licensed under Creative Commons Attribution-ShareAlike 3.0 (CC-BY-SA) unless otherwise noted; code licensed under GNU General Public License (GPL) or other open source licenses. By using this site, you agree to the Terms of Use, Privacy Policy, and Code of Conduct. · Wikimedia Foundation · Privacy Policy · Code of Conduct · Terms of Use · Disclaimer · CC-BY-SA · GPL