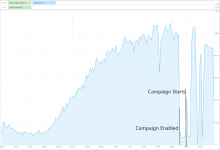 RESULT: Campaign X will suppress Campaign Y which has lower priority despite that no banners from campaign X being scheduled to show for an specified period of time.

I tried reproducing this locally as described, but everything seem worked normally. Any more details or thoughts on how to reproduce would be great! We could try to do so on the beta cluster...

Also, if you look at the wml 2017-gb campaign in countries not targeted by C1718_en6C_dsk_FR, you get a similar pattern of drops (though it's a much smaller amount of data).

I think we do need to find out what caused the drops in wml 2017-gb impressions, but to me it seems far from clear that they're caused by campaigns enabled before their start time.

There were some issues with site reachability in Europe on September 6 and I think at around the right time which might explain some of these drops. It was discussed in wikimedia-operations IRC, but I wasn't able to find an incident report.

I've just repeated this globally on desktop only. The problem is as I describe.

@Jseddon hey... I'm surely missing something... Don't see much in the last graph you linked to, above... Can you tell me which campaign suppressed which one in the test you did? Thanks!!!

This should show the drop

OK, thanks. So the campaign that caused this is wlm 2017-gb-blank?

Next steps would be: re-reviewing the JS code that chooses campaigns, and trying to replicate on the beta cluster.

Intriguing that suppression is only partial, especially for the wlm 2017 campaign.

I'd with your suggestion, @Jseddon, that campaigns not be enabled sooner than necessary until this is dealt with...

The suppression was only partial because I was only targetting desktop with
the banner.

Though if you filter the graph to show only desktop devices, the suppression of wlm 0217 is still only partial. (Just highlighting this because it might help us figure out what's going on...)

Hi! I've successfully reproduced this twice using campaigns targeting aa.wikibooks, on production. We're getting a funny object in ChoiceData, like an array with an empty slot. However, in that case, the JS code does not iterate over it correctly. So we can assume it suppresses all campaigns targeting the language/project combination with the affected ChoiceData.

@Jseddon thanks so much for seeing this, and many apologies for my initial skepticism. You were 100% correct. Amazing catch.

This was due to a subtle bug added with performance improvements, deployed around the middle of 2016.

In ChoiceDataProvider::getChoices(), we were caching choiceData with ObjectCache for up to an hour. So the cache included campaigns that might be available within the maximum cache lifetime. Before returning the cache contents, we were filtering out campaigns that had not yet started or had finished. To do so, we used array_filter, which maintains original array keys. This can lead to gaps in array's numbering, in which case json_encode encodes as a JS object, not an array. Then, on the JS side, we were getting a silent error: the code was acting as if there were no choices, because the object's length property was undefined. tl;dr: Aaaargh!!!!

This should have only affected the system during one hour or less before an enabled campaign was scheduled to start, or within one hour after an enabled campaign's end time. However, it would have affected all users in the project-language permutations targeted by such a campaign. (I.e., if a campaign targeted English and German Wikipedia, then all users of those wikis would have been affected, regardless of country, device, etc.)

The exact duration of the outages would have depended on the exact timing of object cache refreshes. In many cases, they most likely lasted less than an hour.

(The case provided by @Jseddon does fulfill these requirements--the log entry that I missed, the details of which are not displayed in the screenshot provided above, was the change in the start time of the suppressing campaign, to less than an hour before the outage began.)

Thanks so much once again, @Jseddon, @Pcoombe and everyone else, for your help with this!!! :D

Reason:
Re-submitting with message about cherry-pick

Stashbot mentioned this in T176762: [Regression pre-wmf.1] The first letter of every line is disappearing while typing and getting appended at the end of it/on the next line after inserting .Sep 27 2017, 6:23 PM
Stashbot added a subscriber: Stashbot.
Comment Actions

I've attempted to reproduce again on production, and everything seems fine... So, apparently, the patch fixed it (or maybe the fix patched it)... @Jseddon, @Pcoombe, have you seen any indications of this bug since the patch was deployed? Thanks much!!!! :D

Closing, since this seems all good now :)