When searching articles...
...I want be able to quickly search across languages....
...so that I can easily find articles in all Wikipedia languages I read.

Redline mocks on Zeplin board - tagged with Multilingual and Search

Notes on the design

Pre-conditions: User's system language is English only, and their Wikipedia app is also set to English.

Pre-conditions: User's system language is English, and their Wikipedia app has the following languages selected (in order) as 1/English, 2/Chinese (Traditional) and 3/French.

@RHo I am assuming the languages tab layout should not be visible at this point:

When the user has just clicked on search, but not entered a string yet.

Perhaps we can jump on a quick call to go through the flow again on Monday if that helps clarify.

Yes @Rita we should... i will put something on calendar for Tuesday.. I have more questions about showing recent search in languages, should area below tabs be swipeable, etc..

Hi @Sharvaniharan - 99% there! Just a few visual design tweaks as far as I can see: 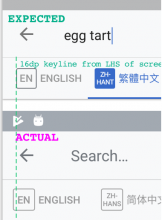 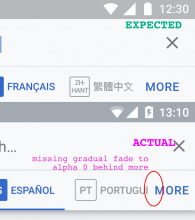 Note that the following items are done via my follow-up patch:

@RHo I made all changes here : https://gerrit.wikimedia.org/r/#/c/432140/
Here is a screenshot of how the label looks now. I have chosen a long lang code for edge case:

Hi @Sharvaniharan - just a few items still to be completed from the previous feedback: 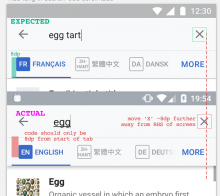 so close @Sharvaniharan ! Still need to update the following 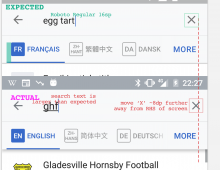 I think this is resolved by changing the android:layout_marginEnd from "16dp" to "8dp" on line39 of the apps/android/wikipedia / app/src/main/res/layout/fragment_search.xml file. Have commented on gerrit as well

Great, all points resolved and ready for QA now thanks @Sharvaniharan

Thanks @RHo ... sorry it took some back and forth... I previously made all changes to the library file that renders the search bar and it just stayed local.. thanks for the re-reviews!

I was able to add languages and reorder them. Tested both scenarios on two devices.