NOTE: This happens on both Android and iOS apps.

But when trying to edit the Cantonese item descriptions using the mobile app, an error occurs and the edit cannot be saved. The error message seems to suggest the problem has to do with the fact that the domain name (zh-yue.*) doesn't match the language code (yue). (The domain name vs ISO 639 discrepancy is discussed on T10217.)

Until T10217 gets fixed (it has already taken 9 years and is still open), please resolve this mismatch by letting zh-yue.wikipedia entries match up with the yue language descriptions on Wikidata for both reading and editing.

Can you help me understand this bug so I can make sure it gets to the right people?

Please see attached screenshots - It seems that one is able to see yue
labels from Wikidata on Wikipedia Mobile app but gets an error when one
attempts to edit them.

I apologize for my confusion - another yue.wp editor reported the bug to me.

Looks like this is a bug in the app. Not the mobile web experience. Adding mobile content service and android is already on ticket.

I don't think so. T173842 is more complicated: zh.wp wants to push and pull different labels from Wikidata depending on the language variant that is currently being displayed for the article content.

This task is about fixing the bug that the mobile app can't edit yue Wikidata labels when browsing (zh-)yue.wp .

@RHo As I mentioned above, this is related to, however, the T112426, because without founding a way to change the actual wiki identifier (i.e. what you saw in small grey box left of the affected language link in any random Wikidata items, e.g. in Template:Cite web (Q5637226) 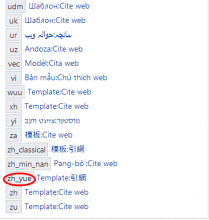 @Jdlrobson should I mark T112426 as a blocker item per above?

@Liuxinyu970226 not completely sure right now, TBH it sounds like an issue inside either the Android web client or inside the API that it uses. @Charlotte and @bearND / @Tgr should hopefully be better equipped to determine the root cause of the problem and which team(s) is best placed to fix this.

At a glance this problem seems to be specific to the editor interface which I don't imagine should be subject to T112426.

As far as I understand this issue is only with the apps, not Mobile Web or Mobile Content Service. While I do not get the toast message with the error message I saw in the screenshot above I have a potential fix, see my gerrit patch above. The issue is that some wikis, like zh-yue, have hyphens in the subdomain but the database name has _ instead. See config. So, zh-yue.wikipedia.org -> zh_yuewiki.

Still unlucky, by trying anonymously I still can enter a zh-yue description rather than yue.

I may need some help on this one. Being a non-speaker of Cantonese, it is a bit difficult to tell whether this one is fixed. I was able to set my device to Cantonese (I think) and I was able to edit a description and I received the below info that looks like possibly an error, but it is hard to tell.

@cooltey and/or @RHo, is this expected? Is my setup incorrect? Thanks for your help!

Cool thanks so much @cooltey!!!

See d:Q26875136.
The description is added under the language "zh-yue" instead of "Cantonese". However, the app still shows a message saying the description is successfully published
(Using Wikipedia Beta 2.7.237-beta-2018-06-27)

Specifically this diff, that's why I can say that this issue still exists.

We believe this was fixed with the recent iOS release (see subtask). Please re-open the subtask if this issue remains for iOS.

We are using the https://www.wikidata.org/w/api.php?format=json&formatversion=2&action=wbsetdescription to submit the description.

What's the correct string for the language and uselang for submitting the zh-yue description?

I've tried to convert the zh-yue to zh_yue, but will get error message when language receiving the zh_yue.

If I send the language = zh-yue and uselang = zh_yue, and the string will be posted to the wikidata successfully, but the description will not show on the article.

Do you have any suggestion?

or @JoeWalsh, what's the current of behavior of sending the zh-yue description?

@cooltey I think you don't need to set uselang. uselang is only for message translations, like user visible strings. Error messages and such AFAIU. You could set it to user or content, according to the help text in https://www.wikidata.org/wiki/Special:ApiSandbox.

+ @Jdforrester-WMF and @Tgr since they probably know more about language variant implementations than I do.

uselang is the user interface language - the conceptual equivalent of going into your preferences and changing the language (the actual equivalent too, overriding that setting is exactly what it does). That setting is accessible to MediaWiki methods called by the API, and used by some of them, but it's used very little (just like how MediaWiki's behavior is not affected much by your language settings). The only thing I can think of is that in action=parse some wikitext constructs like {{int:}} will translate to that language. API response message translations are actually determined by a separate parameter, errorlang, although it does fall back to uselang (and then that falls back to your user preferences and then to the wiki content language).

As for zh-yue vs. yue, I'm not familiar with the details of that mess, other than that yue is the real ISO language code but we are stuck with zh-yue in some places that are particularly hard to change (see here). Also T30441#3824111 seems to say that zh-yue is used as a language variant on zh.wikipedia, as opposed to zh-yue.wikipedia.org which is in yue, a separate language (as far as MediaWiki is concerned).

@cooltey - @bearND is right that the language should be changed from zh-yue to yue. There are a few other entries in the mapping dictionary on iOS so those should be adjusted before passing to language as well. @NHarateh_WMF is there anything else that needed to change on the iOS side or just the language code?

@Tgr Do you know why in Special:ApiSandbox one can only select zh-yue instead of yue in the dropdown for language? I had to change the URL to get it to take yue to try it out.

I see both in the dropdown.

Note: going to use https://zh-yue.wikipedia.org/wiki/Special:ApiSandbox#action=query&format=json&meta=siteinfo before submitting the description

Change 483023 had a related patch set uploaded (by Cooltey; owner: Cooltey):
[apps/android/wikipedia@master] Use siteinfo to get correct language code before submitting title description

Change 483023 merged by jenkins-bot:
[apps/android/wikipedia@master] Use siteinfo to get correct language code before submitting title description

I've been testing and editing lots of Cantonese Wikipedia articles' description, and all of them look good to me.

Since @ABorbaWMF cannot read the Traditional Chinese, I think it is fine to move to Ready for signoff column.

@deryckchan Did you use the current Beta app to test the feature? We haven't pushed it to the production yet, but you will see it soon.

Ah, I'm very sorry. No I wasn't using the beta app. I'll wait till the
proper roll-out and test again.

@deryckchan No worries. I believe that now you can download/update to the latest version of the app, which resolved the issue.

Yep, it works now, thank you!

I wasn't aware of the rep-lag so I was surprised that yesterday's version
hadn't received the patch yet.

Thanks for fixing this! I think we can mark this as resolved.

@deryckchan No problem :) Hope you enjoyed the latest update.