Seen on the Taiwan page on reading web staging:

Note how the second infobox moves into the Etymology section causing text to reflow.

Note: There is an unrelated re-render triggered by the page issues link appearing at the top of the page. Please ignore this as this will be solved by redesigning the page issues treatment.

This appears to be related to the loading of the CSS rule:

Change 429982 had a related patch set uploaded (by Jdlrobson; owner: Jdlrobson):
[mediawiki/skins/MinervaNeue@master] Improve use of whitespace on tablets

^ @alexhollender I've put this on staging. I think it solves the issue with Taiwan and USA. Can you check it out and see if it causes any other problems elsewhere?

Change 429982 merged by jenkins-bot:
[mediawiki/skins/MinervaNeue@master] Improve use of whitespace on tablets

@Jdlrobson yes this seems to do the trick. I don't think it needs additional QA. Going to move to Sign off.

That rule is not redundant, what it actually does is magic! (which I now realize, should really be documented)

What that rule does is it creates a new "block formatting context" a concept briefly described in T189688#4162235 which essentially creates a bounding box that prevents floated thumbnails from "escaping" the section, while letting the section take up the available space beside the infobox. 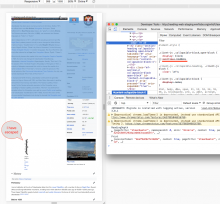 Without this rule, the floated thumbnails get pushed next to the last floated element, which is probably the infobox.

With this rule, the floated thumbnails get contained within the "block formatting context" 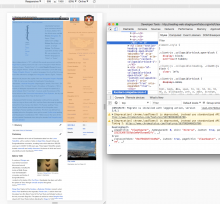 Which is probably better. This rule does mean that the sections don't wrap around the infobox, but it's still preferable than having the thumbnails in weird places.

Regarding the reflow, this is caused because the rule was attached to the .client-js class, which gets appended after page-load. If it was attached just to

then that wouldn't trigger the reflow.

scratch that, that might interfere with the jQuery .show() .hide() that uses display: block/none to show hide elements a lot.

looks good to me. @Jdrewniak - any suggestions on where to document this?

Change 430378 abandoned by Jdrewniak:
Prevent floated element from breaking out of content sections

Resolving this and will keep further issues under the parent task