When trying to publish a translation with content that triggers an existing abuse filter, the captcha returns an error even if answered correctly. This prevents the user from publishing giving a reason (wrong captcha provided that is misleading. The user should be able to pass the captcha and get the abuse filter error with the details on what is wrong.

I tried this on the testing servers by adding text "hahahahahahahahahahahahaha" after a paragraph in its own line, which should trigger the "repeated characters" abuse filter defined in T192524. 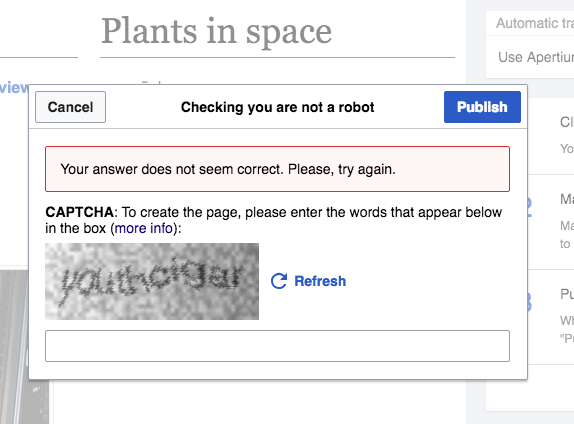 I have tried usage scenario described in this ticket 3-4 times since the ticket was created and every time the result was aligned with what's described in T151116. It takes two successful captcha entries to publish. And that behavior isn't coming from CX side. We just catch the error returned from the server, which says captcha should be filled and then we display the dialog.

If no one else can get different behavior (like captcha not recognized more than two times), there might be another issue than one described in T151116, but not many things we can do on CX side.

Thanks for the investigation @Petar.petkovic. I think we can close the current ticket and just track the more general T151116.
However, there is still the open question about why CX was not showing the abuse filter errors, and whether the work to be done to complete that is already captured in the current tickets or new ones need to be created.