https://commons.wikimedia.org/wiki/File:WikiImplementationBug_T194192.svg
Librsvg renders it correctly, but the image ist wrong embedded in the html:

but it should be:

or it could also be: 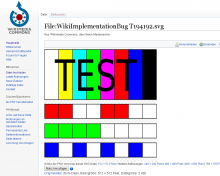 How it should be impemented: 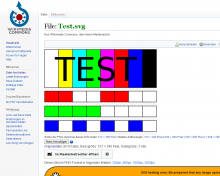 It's unclear to me where exactly to see the problem. Is this about the "File history" section?

How is the task's title related to the issue? Asking as viewBox is nowhere mentioned in the task description.

Thanks, so I guess this is not about the "File history" section.
Which web browser is this about? Have you tried bypassing your browser cache?

As you can see in https://commons.wikimedia.org/wiki/File:WikiImplementationBug_T194192.svg#Test-Area it is a problem of the implementation.

The problem is if viewBox uses as list-separator comma and not spaces librsvg knows the size, but the Implementation not, therefore it just uses the default 512x512

@Aklapper: It is not a problem of browser cache, it is a problem that the Website does not include the png correct.
(Ps: I deleted several browser cache, and the problem still occurs in Google-Chrome, Firefox, Internet Explorer and Microsoft Edge)

How it should be implemted

MediaWiki must learn the size of the svg file in order to scale it properly. MW presumably does that by parsing the SVG file's root element to learn the image's dimensions. The viewBox attribute should be the authority for the dimensions; if that attribute is not present, MW would probably look for the width and height attributes. (Those attributes default to 100% and should not be set to absolute sizes.) Failing to find either, MW would probably assume 512x512.

The bug would be MW finds the viewBox attribute, but cannot parse one with commas, so the default 512x512 remains.

scroll down to file history, look at the dimensions column, which is 512x512

scroll down to the bottom metadata section, and the width and height are each "100%"

Right click on the SVG image to open it in another tab, right click to view source, and the root svg element has

Is https://commons.wikimedia.org/wiki/File:Librsvg-svgfont-test.svg the same bug? (The picture seems to be rendered correctly (except for the unknown font-characters).

No matter what the priority is, it should be a one line fix to the regex at line 328:

the trim flushed leading and trailing spaces, so we need not worry about them.

Adding TheDJ because this is similar to T201274