Looking at performance.wikimedia.org Apache config I noticed an entry for /xhprof that proxies to http://tungsten.eqiad.wmnet/xhprof/.

It appears to be some kind of XHProf viewer. Currently at https://performance.wikimedia.org/xhprof/. 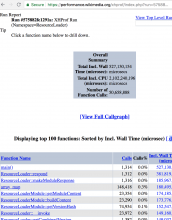 It seems to only have one entry, from 2016, and I have no idea how to get things added to it.

As far as I know it's not part of the XHGui application that runs there, but something else. Possibly this might be the "public_html" viewer that came with the php5-xhprof package originally.

Anyhow, I propose we remove it, which will also make T195314 simpler.

It's also not referenced anywhere except in that apache config file:

Given this, seems safe to remove it.

Applied on tungsten. Apache config has been changed by puppet. Regarding /srv/xhprof/xhprof_html do you want me to delete it or do we just not care because tungsten will be decom'ed as soon as we are done here?

@Dzahn We can just leave xhprof_html lying around, it'll be doing away soon enough.

Tentatively re-opening, but prepared to be called wrong.

I was looking at the XHGui puppet classes as part of the upgrade (because we may need to puppetize a config.php file soon), and spotted what appears to be source for /srv/xhprof/xhprof_html - in Puppet.

With the xhprof_html/ web app coming from https://gerrit.wikimedia.org/g/operations/software/xhprof/+/wmf_deploy. I guess we'll want to archive the git repo as read-only and remove the puppet resource.

The node using the xhgui::app role which is using this is tungsten. tungsten was installed back in 2015 in T117888 as a test system for InfluxDB. The system uses no other roles so if this is decom'ed the question should be if the entire tungsten host can be decom'ed.

Yeah, but it's gone through decom and since been repurposed for XHGui. And since then, again being decom'ed now as part of T158837. We're mostly done with moving the webperf stuff from old hardware (hafnium and tungsten) onto multi-DC Ganeti VMs.

For hafnium this work is done.. Its services have been refactored and consolidated under the role "webperf::processors_site", running on webperf1001/webperf2001.

This task is for removing the left-over bits of the "XHProf Viewer" which was the predecessor to XHGui, but it hasn't been accessible or used in any way for a long time. We thought it was just unpuppetised left-over, and that might still be the case, as I haven't tried applying the role elsewhere. But there still appear to be some puppet resources related to it as well.

merged. want me to also rm /srv/xhprof/profiles on tungsten? are you doing that?