As a user I would like to filter languages shown in the term list, so I can select the languages I am interested in.
When I am at the bottom of the languages list I see a toolbar with a button 'Show more languages' 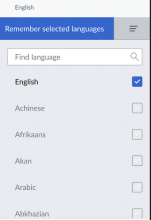 When the dialog is open
then I see:

When I remove the text
then all languages should be shown. 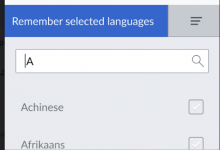 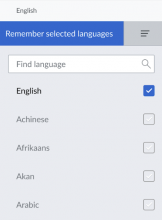 When I select (checkbox) a language
then it is set as a filter for the terms list
and its position changes to the one after the last selected language ( e.g. top image English )
and it is added to the list of currently selected languages .( e.g. bottom image English, Afrikaans, German, Russia, Spanish ) 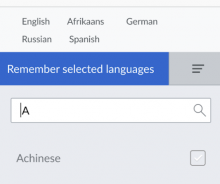