It is possible for us to query the local storage cache (mw.loader.store) to determine if VE has been loaded before by the client.

If it has then about 300k out of 500k of the modules (compressed sizes) will be in local storage. The remaining modules (ext.visualEditor.core & oojs-ui-widgets) will end up in the browser cache (after the second load).

If this is the case, then we can take about 200ms off VE load time by loading all these modules into memory in the background after the page has loaded.

If we think this is too aggressive, we could consider loading them when the 'edit' button is hovered, or some other heuristic (e.g. user has edited in the past 24 hours).

There's always tradeoffs: preload it so that it works faster for people that do use it but make things slower for those that don't, but doing nothing does the opposite. Needs some discussion!

Currently, preloading is difficult to get right in such a way that won't cause a slow down of the page load time, and also won't cause a notable interruption of synchronous JS execute when the user might be doing other things.

Here is my conservative checklist for getting it right without further needing further sign-off from performance team, and without being blocked on T176262:

What about loading CSS files? Do we need to make sure they don't trigger any layout changes (they shouldn't anyway)?

@Esanders Yep, preloading CSS files is fine. I'd recommend the same approach for CSS as for JS. (Deferred, as per the above).

It's good for UX when CSS-preloading doesn't cause a visual change in layout, but it unfortunately does not make it a cheap operation for the browser. Once something is rendered on the screen, we want to avoid the user's browser from being frozen for any noticeable amount of time (e.g. unable to respond to scroll, type, touch, or hover/click).

I hope that a proper idle-guarding, CSS-preloading can be acceptable. Certainly worth trying given the benefits!

Worst case scenario: We might find the CSS payload to be too big to parse and apply (gracefully) in a single step while the user is reading (e.g. freezing the browser momentarily). If that happens, we should preloading less of the VE-CSS payload, a compromise from "preload everything" to "preload enough to be a win, but be not so much it disrupts the reading experience".

Note that once we solve T176262, we could (in theory) safely download any size stylesheet without risk of freezing and without needing to compromise. This would be possible because that task enables us to separate the "download" step from the unpack+parse step. The download step is what takes the longest from the user's perspective (which we would still do, for all VE-CSS), the unpack+parse step is what can freeze the browser momentarily, which we'd only do once the interaction starts.

Responding to a question that someone (I had the etherpad active and so couldn't see who was speaking) asked today during SoS: We don't have any current plans to work on T176262 -- it's in our backlog, but isn't something that we've chosen to allocate time to working on to this point.

Does the response from @Krinkle on Sept 5 give you enough to go on without us prioritizing that work? Or are you blocked until we're able to get to it?

We don't have any current plans to work on T176262 -- it's in our backlog, but isn't something that we've chosen to allocate time to working on to this point.

Does the response from @Krinkle on Sept 5 give you enough to go on without us prioritizing that work? Or are you blocked until we're able to get to it?

We aren't blocked on this and should be able to move forward with our own solution. Thanks for letting us know!

Following on from our offline discussion I've profiled the mw.loader.using( VEModules ) step. It looks like the majority of the time is spent eval-ing the code: 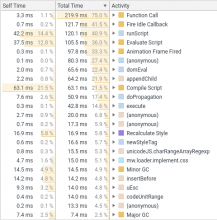 There's about 220ms total time. 105ms is in "Evaluate script", and 65ms in "domEval" (most of which is appendChild for the script tags), whereas only 50ms is spend in doPropagation/execute.

The good part is that ResourceLoader has separate eval and execute steps so it should be possible to create a new eval-only API where modules are taken out of the local store as strings, and eval'd into the moduleRegistry. This avoids the issue around resolving dependencies, and the modules would not be executed until they are actually used.

Someone with a better understanding of startup/mediawiki.js may know a better way to do this.

@Esanders That seems like a good way to implement the feature in ResourceLoader.

I rewrote this comment a few times, as I initially thought your proposal is effectively what I wrote at the aforementioned T176262 (albeit with a slightly different name), but I see now the difference now.

T176262 outlines a preload feature for the downloading of VE source code.

Your proposal is for running only the two steps that T176262 wouldn't, which is cache lookup and evaluation of the implementation string.

I'd estimate both are equally difficult to implement and both benefit distinct but important use cases. I think it makes sense for ResourceLoader to provide both of these eventually - implemented in such a way that both can be used, but in separate background tasks so that there is breathing space in between for the viewport to render and handle input events.

I'd support either of these with CR as needed, and might be able to chip in afterwards to add "the other" half based on it.

Removing task assignee due to inactivity, as this open task has been assigned to the same person for more than two years (see the emails sent to the task assignee on Oct27 and Nov23). Please assign this task to yourself again if you still realistically [plan to] work on this task - it would be welcome.
(See https://www.mediawiki.org/wiki/Bug_management/Assignee_cleanup for tips how to best manage your individual work in Phabricator.)