Our current Thumbor installation (debian jessie + librsvg 2.40.18-1) is not rendering properly SVGs -> PNG. We believe that librsvg >= 2.43 will fix most of our issues but:

After assessing running Thumbor on stretch with librsvg 2.40.20-3, we have the following options:

2. Hold the upgrade, wait for buster to become stable and migrate Thumbor directly to Buster (probably Q4 or Q1 FY19/20?).

I would suggest adding a third one with the same naming (which will make it inherit the "project" puppet config) running Stretch, with the appropriate puppet role (role::thumbor::mediawiki).

Once you have that running, the thumbor process should be up on that machine and we can test sending local requests to it to have it generate thumbnails (or fetch existing ones). This should already allow us to test rendering of a variety of files before putting that new server "into rotation" for Beta.

I have setup deployment-imagescaler03 and applied role::thumbor::mediawiki. Please find me on IRC and tell me how I can help :)

@kaldari We have deployed librsvg 2.40.20-3 on deployment-imagescaler03 under debian stretch, after some testing it does't look like SVG rendering is improved. Please have a go as well and let us know:)

@jijiki - Is there a way I can test it, other than locally?

If the files are already on Beta, purge them, make sure your browser cache is cleared for these images, and you'll get thumbnails generated with librsvg 2.40.20-3

I tried doing that on the 3 images you provided before.

The first 2 have improved a little in the sense that the font seems to be rendered the same (before the width of the text varied), but the location of the text is different between both files:

And there doesn't seem to be any improvement for your third test file:

@kaldari there is a thumbor debug log on deployment-imagescaler03 under /var/log which was generated as I was testing https://commons.wikimedia.beta.wmflabs.org/wiki/File:Rsvg_text_rendering_test_13.svg

If you don't see anything funny there, how do you think we should proceed?

@jijiki - The first test seems to be hugely improved:
On beta cluster:

It is frustrating though that the kerning bug has been replaced with a position change bug! Still seems to be a big improvement though.

The 2nd test case is also improved, although only when the glyphs are continuous (the left side of the SVG). The kerning for glyphs in separate tspans is still buggy (right side), but that's by far a less common use case.
On beta cluster: 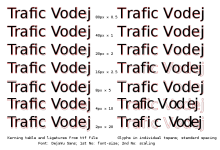 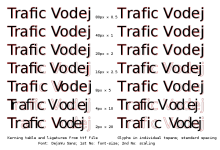 Overall, it seems like a significant improvement, IMO. Of course it's still crap compared with any browser's native SVG rendering :(

There should also be a number of additional test cases in Phab: https://phabricator.wikimedia.org/tag/wikimedia-svg-rendering/

IMHO it makes sense to upgrade to Stretch next (which in the addition to the librsvg bugfixes also brings in refresh of the underlying multimedia library stack, two years worth of distro development). More significant improvements will be available when moving to buster and the Rust-based librsvg in the future as well.