In the latest Vivaldi and Chromium browsers, a Wikisource Page ns page in edit mode, the header and footer is visible but not accessible. However, it works fine in Firefox 64. Please see the image in this link which shows the appearance of these two areas.
https://en.wikisource.org/wiki/File:Page_ns_cannot_edit_header_%26_footer_in_Vivaldi_and_Chromium.jpg
This issue is the same in the Windows and Linux versions of these browsers.

Mentioned In
T219048: Height of header and footer of ProofreadPage reduced, cannot resize text fields in browser
T213043: Wikisource {{Template:Rule}} is not visible in the footer
Mentioned Here
T209939: Convert Proofpage WE layout to use display flex

When filing tasks, please always provide a link that allows someone else to try reproduce, provide a list of steps, expected outcome, and actual outcome. See https://www.mediawiki.org/wiki/How_to_report_a_bug . Thanks!

I had to google some text shown in your screenshot in order to find https://en.wikisource.org/w/index.php?title=Page:Houses_and_House-Life_of_the_American_Aborigines.djvu/141&action=edit 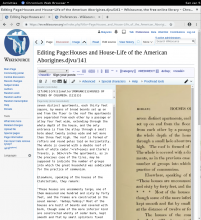 @Aklapper, I must have used a simple bug report form because the fields indicated in the tutorial did not exist.

This problem appears in the following versions: Vivaldi 2.2 and 2.3, Chromium 71 and 72. and it was confirmed by Vivaldi where they tried both browsers because Vivaldi is Chromium based.

The problem is the same in either Linux Mint or Windows 10.

I normally work in Firefox (v64.0 currently) where this is not a problem in either OS.

Also used the &safemode in edit mode and the problem remains the same.

I must have used a simple bug report form because the fields indicated in the tutorial did not exist.

There are no "fields"; https://www.mediawiki.org/wiki/How_to_report_a_bug only explains what should be in a Description field.

Ah, I found a setting called Horizontal layout when editing in the Page: namespace under "Editing" in the Preferences, in order to get your page layout and in order to reproduce the problem. Please include such things in your steps to reproduce in the future. :)

Adding ProofreadPage project tag, as the textarea above is inside prp-page-container in the HTML source (feel free to correct me).

I'm wondering if T209939 is actually the underlying culprit here. Didn't think of that earlier.

@Aklapper It seems very likely. Chromium is a fork of WebKit (the Safari engine) which exhibits the same problem (cf. the comments in the other task), and the timing (at least roughly) of this problem appearing coincides with the deployment of the changes there.

PS. The 404 image is not related to those changes, I don't think. That's been an issue for a lot longer (I never reported it because it seemed just cosmetic). It may be a contributor in terms of making some javascript blow up with attendant run-on effects, but otherwise a separate issue.

AKlapper, thanks for your instructions. Will do so with future bug reports.

Just to note for future reference, there have now been reports of this happening also in the browsers PaleMoon and WaterFox, who both seem to be Mozilla/Firefox forks, as well as Internet Explorer (unspecified version). My own tests suggest the "Horizontal layout" option has no effect either way on this (turned it off, no change), except in so far as it probably enables the "Show header and footer fields" option just above it (not sure what the default is for that). And if the header and footer fields aren't displayed at all you will of course not be able to reproduce any problems with them.

Crossing fingers that this really is another side effect of the above linked Flex Box issue and will go away with the rollback of that.

Quick update from enWS: 1.33/wmf.12 is now live there and a quick check suggests it fixes the disappearing header and footer fields. IOW this probably confirms this was caused by T209939.

The bug is corrected and the ruler displays correctly in the footer. Thanks to all.

@Ineuw: For future reference, feel free to do so yourself by setting the status of this report to "Resolved" via the Add Action... → Change Status dropdown.