Visual editor has a problem with adding a link when the anchor text contains a foreign character expressed in HTML format (entity)
Closed, DuplicatePublic
Actions

In https://en.wikipedia.org/w/index.php?title=Bombo_railway_station&oldid=870980076 in the section "Platform building (1887), the architectural term "facade" is written in the French form "façade" with a cedilla (the curly thing under the "c").

I tried to link this to the Wikipedia article "Facade". I did this by selecting the text and then clicked the Link icon on the tool bar. The normal link dialog pop-up appears 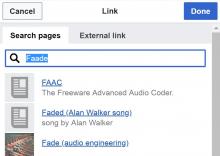 As you can see, the text in the search box is "Faade" and the suggested links are not what I want. I'm not sure whether I'd call this a bug at this point. As a user just trying to get a job done, I said to myself "Ah, the cedilla is confusing it, but that's OK, I'll just type in the word "facade" into the search box. I did this and I get this: 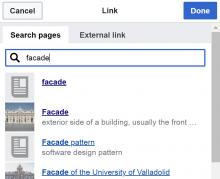 The desired article "Facade" (exterior side ...) is there, I click it, thinking all is well. But then I find that clicking "Done" does nothing, clicking "Cancel" does nothing. The Link pop-up is determined to stay put. However I can click outside of it (the Link pop-up remains) and take a look at the article and I see that "façade" is now a red link (why?) and Publish Changes is blue (so VE thinks a change has been made, fair enough). Anyhow (as I had done other edits that I wanted in other parts of the article), I published the changes and then looked at the article in source editor and found the change that had been made was

and perhaps it was the HTML representation of C-with-cedilla that was the problem. Interestingly, if I switch into source editor after I try to link to Facade and have the sticky Link box problem but before I "publish changes", I do not see the link to Faade at all, just unlinked fa&ccedil;ade is present in the text. So the source editor doesn't seem to think any change was made, yet Publish Changes in VE thinks I wanted a link to Faade.

I then experimented to try to fix the problem (correct the link to be "Facade" in a subsequent VE edit) but the same sticky Link box resulted (as described above) and there was no change to the linked article. After a bit more experimentation, I gave up and fixed it in the source editor. I do not think there is a way to link that word (or change the link once it is Faade) in the VE.

Duplicates Merged Here
T217658: Visual editor has a problem with adding a link when the anchor text contains a foreign character expressed in HMTL format