Challenge Understand how the Swedish National Library , VIAF and Wikidata should work together better

Background: After one year nothing is shared what is planned regarding the new Swedish National Library system LIBRIS XL instead we start seeing odd things and a lack of project management/ change process ---> we are still guessing.

Solution we need a platform like Phabricator were VIAF LIBRIS Wikidata can speak/share/bugreport and see who is doing what and what is not done and what open issues we have. The new ecosystem for Authority data that is more dynamic requires that we care more about the data and understands what we agree and disagree about....

Answer Moreno,Hayley <morenoh@oclc.org> 6 dec. 2018 18:33 We are aware of this change and are in discussions with the National Library of Sweden on updating their links in the VIAF database. We hope to have this implement this change in the future.

In Wikidata I requested a new Property:P5587 LIBRIS-URI dedicated for LIBRISXL --> we did a design decision to separate the old LIBRIS ID and the new LIBRIS.URI ID

Odd things at VIAF and no feedback/ specification what is planned

Below how VIAF start presents LIBRISXL ID in the old LIBRIS field... after a week we get an indication that something is wrong but not how it should work and no Task ID/no place to track the change process/or a date when fixed 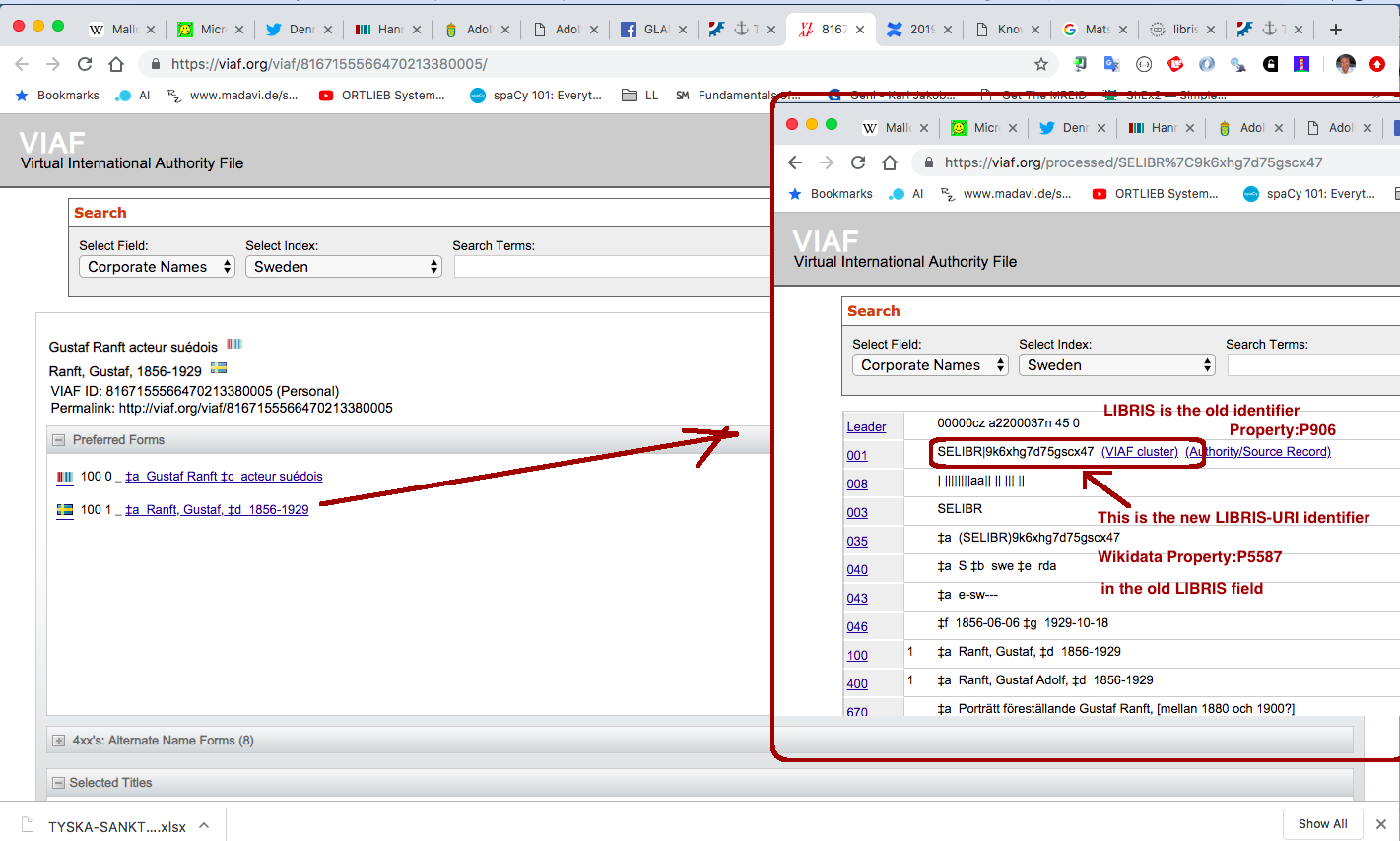 Answer in two emails from Anna LIBRIS 2019-05-xx: yes there is a problem that is reported to VIAF
(Magnus comment: no task id or description) 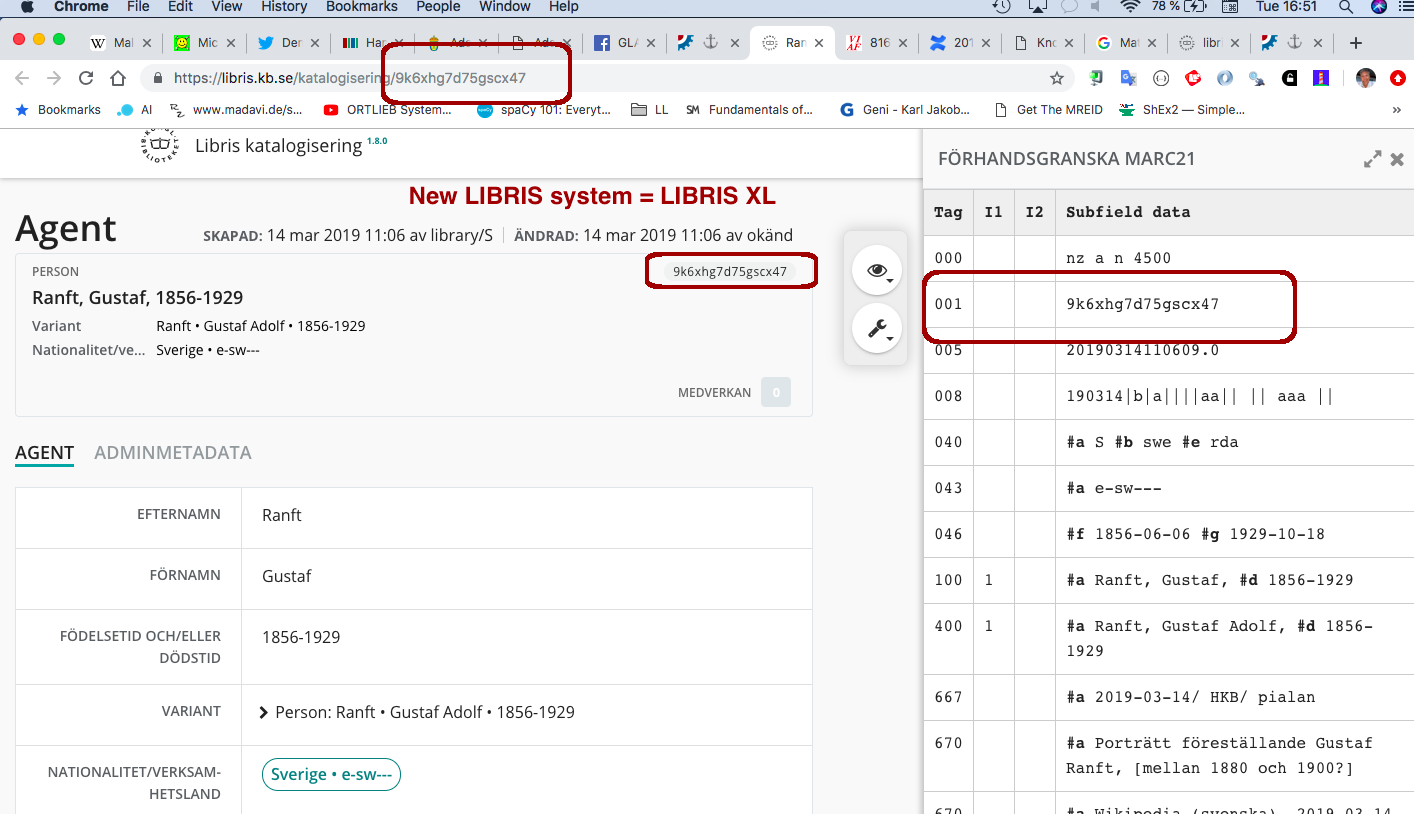 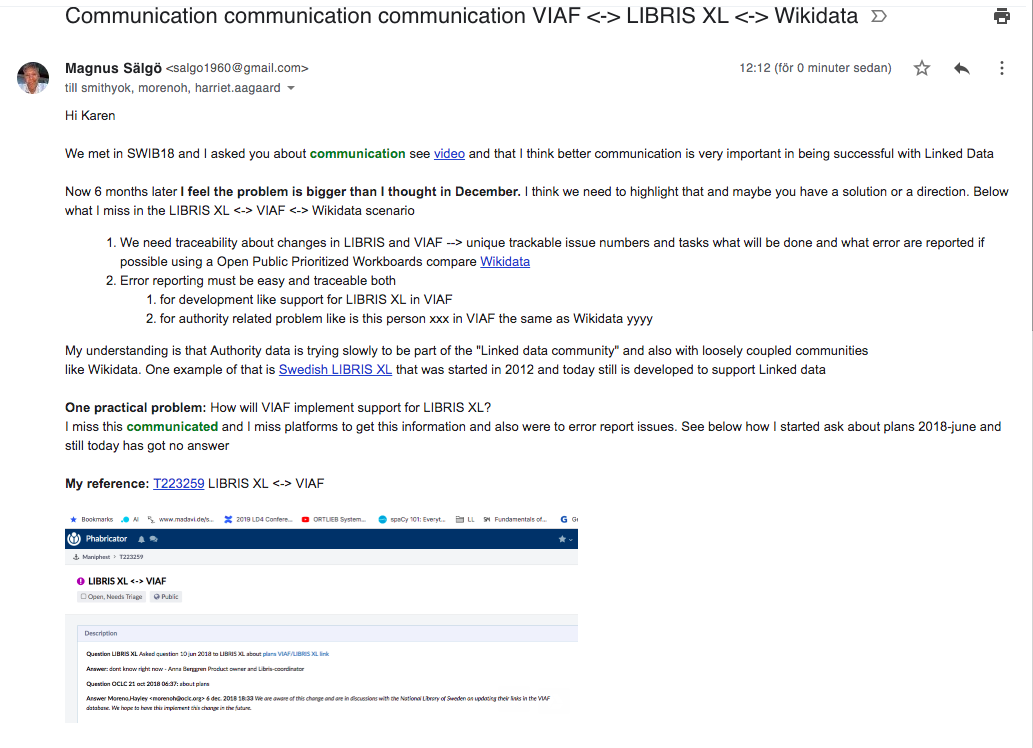 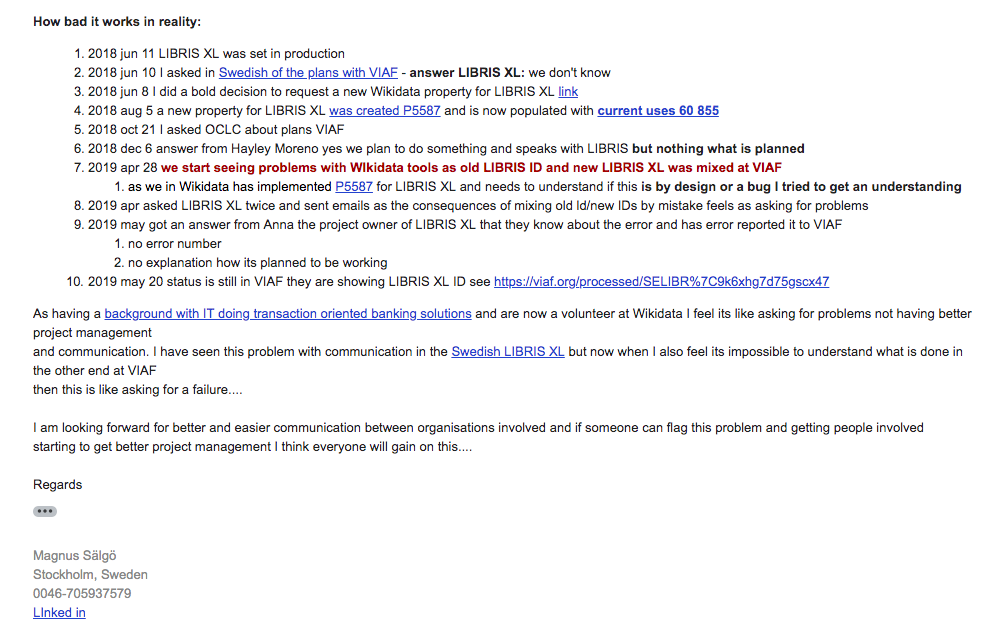 Another mess?!?!? Also on the Wikidata object in VIAF they start mention SELIBR and not the name LIBRIS-URI we use for the LIBRIS XL Id Property:P5587 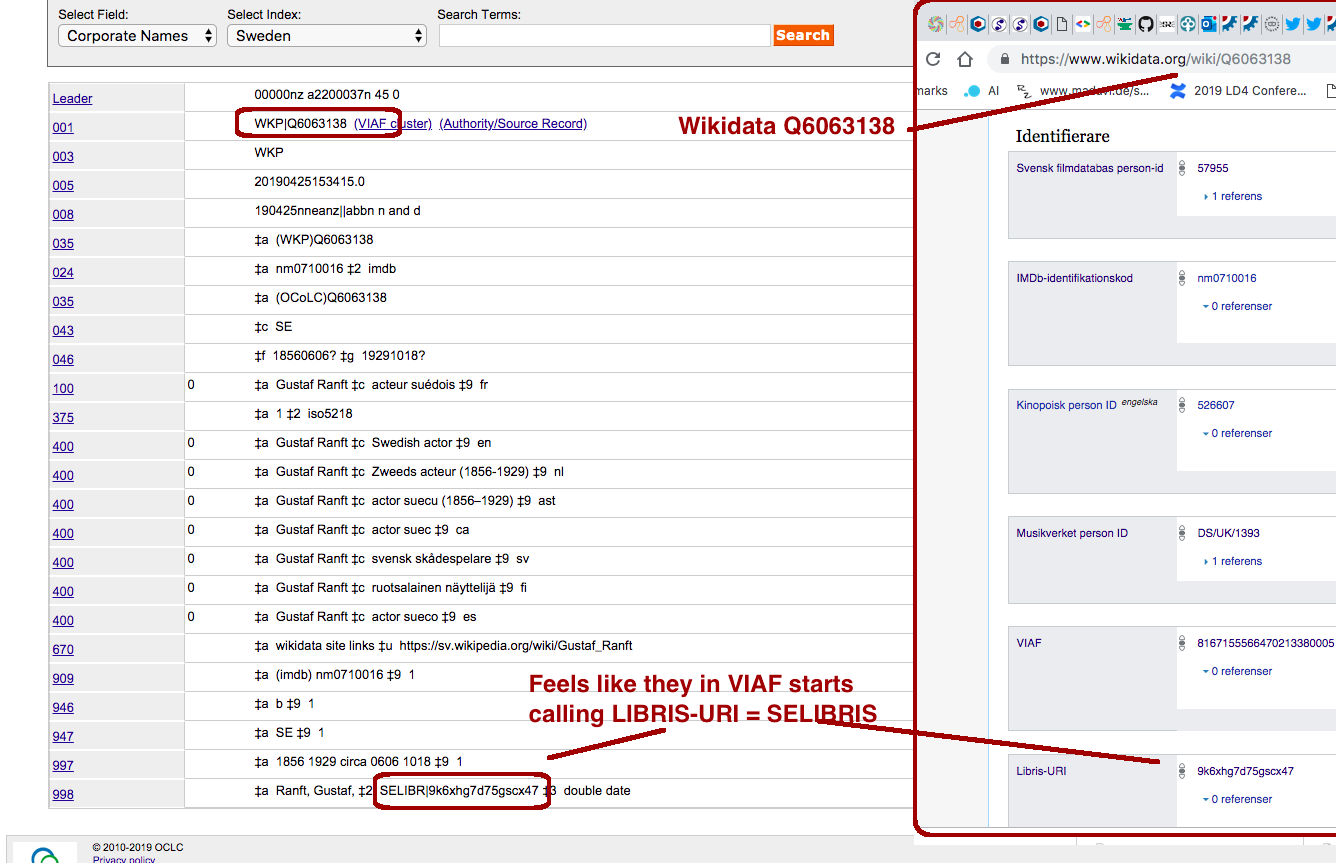 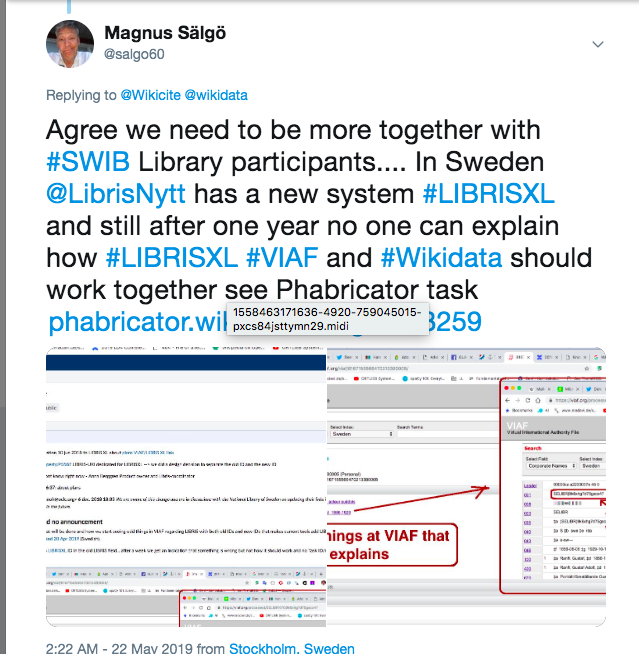 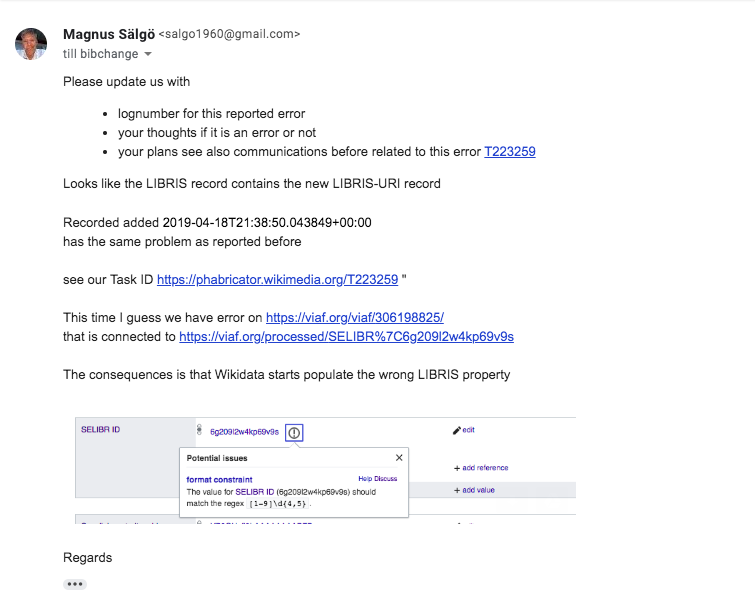 Query to find potential LIBRIS-URI in the Wikidata SELIBRIS field

A wild guess is that the odd uploads was temporary

Seems not a valid theory

Confirmed from VIAF that the plan is two IDs so what we saw was a temporary bug.

cc: @Alicia_Fagerving_WMSE FYI we are start getting the new ID in SELIBRIS.... I try to find the LIBRIS/VIAF status and what tools needs to be updated.... I dont like the idea of one record can have both the old ID and the new ID and store it in one field.... feels like bad design... hope I am wrong...

Tools that use VIAF and maybe need an update 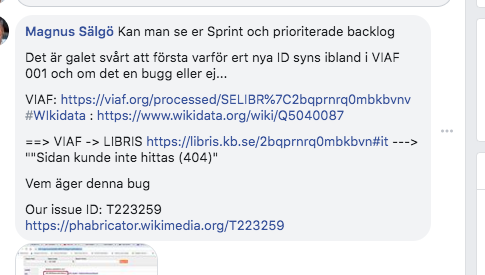 Created a question to LIBRISXL what is the status of better change management with a public workboard so we can track issues like above. They spoke about in 2018 at the LIBRIS user group meeting compare Wikidata 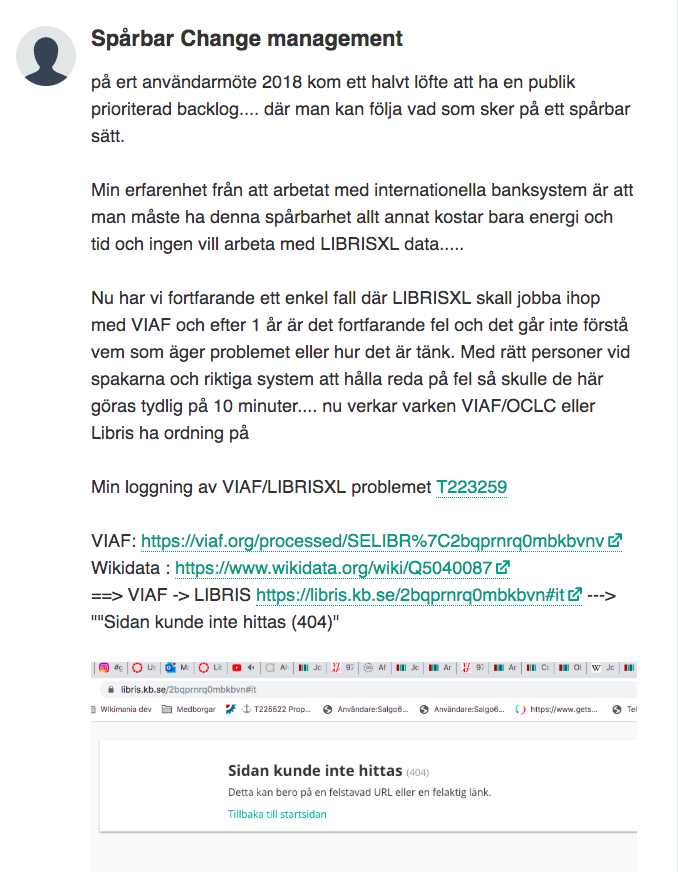