Primerpedia was built as a simple demo, so it was hardcoded to load articles from English Wikipedia.

The goal of this task is to implement support for fetching content from other language Wikipedias.

Note: This task was part of the "Primerpedia improvements" project, carried out during the Wikimedia Hackathon 2019. Project poster: 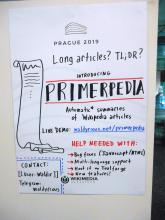 This task was originally reported at the GitHub repo, as issue #9.

The feature was implemented mostly by Witia1 (User:Witia?); my participation was primarily in technical discussions about design and implementation, code review, and minor tweaks to the code.