Use Mann-Whitney U test to compare sampled times in Fresnel
Closed, ResolvedPublic
Actions

Fresnel times certain tasks before and after a commit, then estimates whether the commit caused the times to increase.

In other words, given two sets of numbers, it asks: are the numbers from the second set higher than the numbers in the first set? A commonly used statistical test for this type of question is the Mann-Whitney U test, a simple test that doesn't assume the data are distributed in a certain way.

We compared the Mann-Whitney U test (MWU) to the current test, which checks whether the standard deviations of the two sets overlap (SD). MWU seems to be better at detecting small time increases; SD mostly detects the extreme cases. (See analysis below.)

Currently, the data are often biased, showing an increase in the second set that isn't really caused by the new commit. T223839 will try to fix this.

Until the data are improved, it is arguably a good thing only to report the extreme cases, to avoid inundating people with incorrect reports. This means we will continue to miss smaller performance hits, but in return people won't lose faith in the reports.

Results:
Ideally a test should report 0% failures for k <= 0 and 100% failures for k > 0. MWU comes closer to this than SD (although it also reports a few more spurious failures). The higher sample size shows that SD is more biased against detecting small differences.

A visualisation of the timings for one of the harmless commits that was misclassified demonstrates the problems with the data. (E.g. no statistical test could classify the 7th task correctly!) 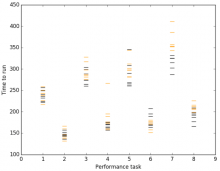