We have a longstanding issue: the visual treatment of Wikidata links and the Prominence Buttons are not ideal due to technical issues discovered while implementing the original design. 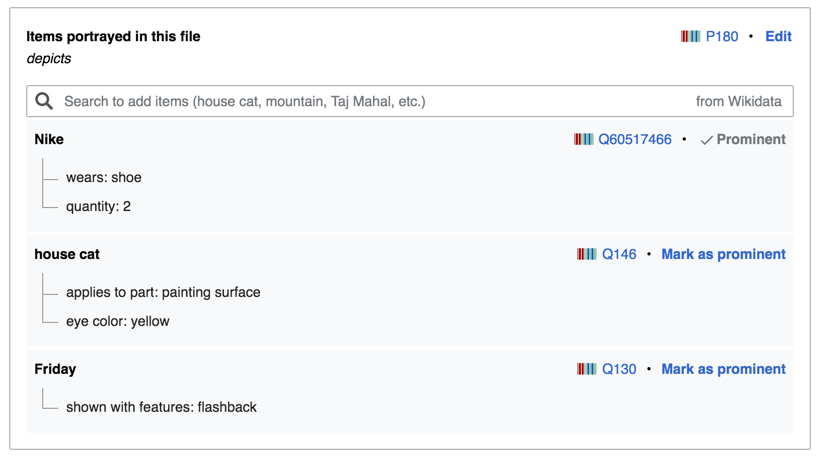 The visual polish present in the original design above was difficult to implement because the “dot” dividers don’t line up in all circumstances, due to the width differences of the “Primary” button text (either “Prominent” or “Mark as Prominent”), and how that already variable width would change when localized. For more information, that declined ticket is here: T218707

One recommended solution has been to hide the Wikidata links and only show them on hover, leaving the Prominent buttons right aligned. This is not ideal as it runs into accessibility and mobile editing issues.

Additionally, making content available only on hover creates more problems than it solves, because it makes Wikidata link use cases more difficult to support. We have community members, eagerly anticipating qualifiers, asking that we display links for qualifier property numbers and values. These use cases are being documented here: Use cases for WD links in Commons Structured Data

We’d like to both refine the user interface and support Commoners who need control over when Wikidata links are shown or hidden. Below are some UX improvements I propose to address the visual concerns of the links and buttons,

Looks good to me as far as pure design perspective. Only question we have is how hard the switching will be to implement in engineering, which is still TBD, but certainly not insignificant.

@PDrouin-WMF I dropped my feedback in Invision. I'm not convinced that this is the right solution. I don't see revealing the full set of information as a setting to be turned on, additionally, I would take some time to rethink the expected affordances around the icons that you chose. Take a look at OOUI to see if there are any opportunities for repurposing and/or applying the iconography.

All the proposed changes are on hold. The team will be implementing this for now: T227230

Closing this because we went with another solution (linking the labels themselves) and that is now live.