Assigned To
Authored By
Tags
Subscribers
View All 17 Subscribers

Thanks @MMiller_WMF, looking forward for checking the data! I was just wondering why Discovery of homepage after account creation (mobile T224883 and noJs T225318) won't make it to the first round?

@Cntlsn -- those aren't in the list because the engineering hasn't been done on them. The components in the list are going to go out this week, and so we'll look at their impact as a cohort. Then we'll look again in a few more weeks when the remaining features to aid discovery have rolled out to see the additional impact from those.

In order to be able to compare these results with those previously reported in our leading indicators analysis, users who registered on mobile or visited the Homepage on mobile are also excluded. This is because the leading indicator analysis was only done on mobile registrations and users.

From this, we can create the following plot of this proportion, with a 7-day moving average added in red to show the trend: 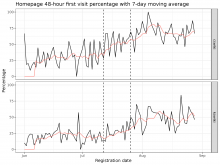 Because of the staggered deployment and large window between them, I chose to use the two weeks prior to 12 July as the "before" period, and the two weeks after 26 July as the "after" period. A caveat with this method is that it does not take into consideration time effects, but based on the data we have I think this is the best approach that also doesn't complicate the analysis. Summing up all registrations and visits within 48 hours, we get the following table:

@nettrom_WMF -- thanks for pulling this together. I'm excited that we seem to have had the impact we were hoping for! But before we wrap this up, I think it is important to reconcile why the "Before %" in your analysis (16.4% and 9.4%) are so much lower than the corresponding numbers from the leading indicators (30% and 23%).

@MMiller_WMF : thanks for asking about why the numbers are different. I went back and had another look at the leading indicators, and then found that I'd forgotten to exclude the control group from the denominator in the current analysis. I'll update the numbers in a minute (spoiler alert: we're still above 100% increase on both wikis).

I'll also rephrase the exclusion of mobile users. There's two reasons for excluding them: 1) the leading indicator analysis was only done on desktop, and 2) as far as I remember the mobile version wasn't deployed until around the same time as the link from Special:ConfirmEmail, so the "before" and "after" groups would then be radically different.

Forgot the second part of this analysis. In this case, I'm using data from the final deployment (26 July) and 4 weeks onwards. All registrations are counted, and the visit_mobile flag below shows whether the first visit was on the mobile (True) or desktop (False) site. Again visits have to occur within 48 hours of registration. Percentages are calculated within each group (wiki and desktop/mobile).

As far as I'm concerned my part of this is now done, so reassigning to @MMiller_WMF for review.

That's great! Thanks, @nettrom_WMF. These numbers look good, and show that we achieved our Q1 goal of increasing the homepage discovery rate by 100%.