Update the look and feel of the edit history screen
Closed, ResolvedPublic
Actions

Why are we doing this?

History and dif pages are used by editors and readers to understand how an article has changed over time. For editors, these pages are integral for gathering context around notifications and are key elements in a variety of common workflows.

For readers, History and dif pages can help to illuminate the ‘inner workings’ of Wikipedia and help to show the living structure of articles and the communities of volunteers who work on updating them.

Currently on iOS the History page does not allow for users to take additional actions on individual edits or to compare diffs.

As a reader using the iOS app, I would like to be able to access history and dif pages in order to better understand how an article has changed over time and to learn more about who has been contributing to an article.

@NHarateh_WMF I've made some small-ish edits to this screen 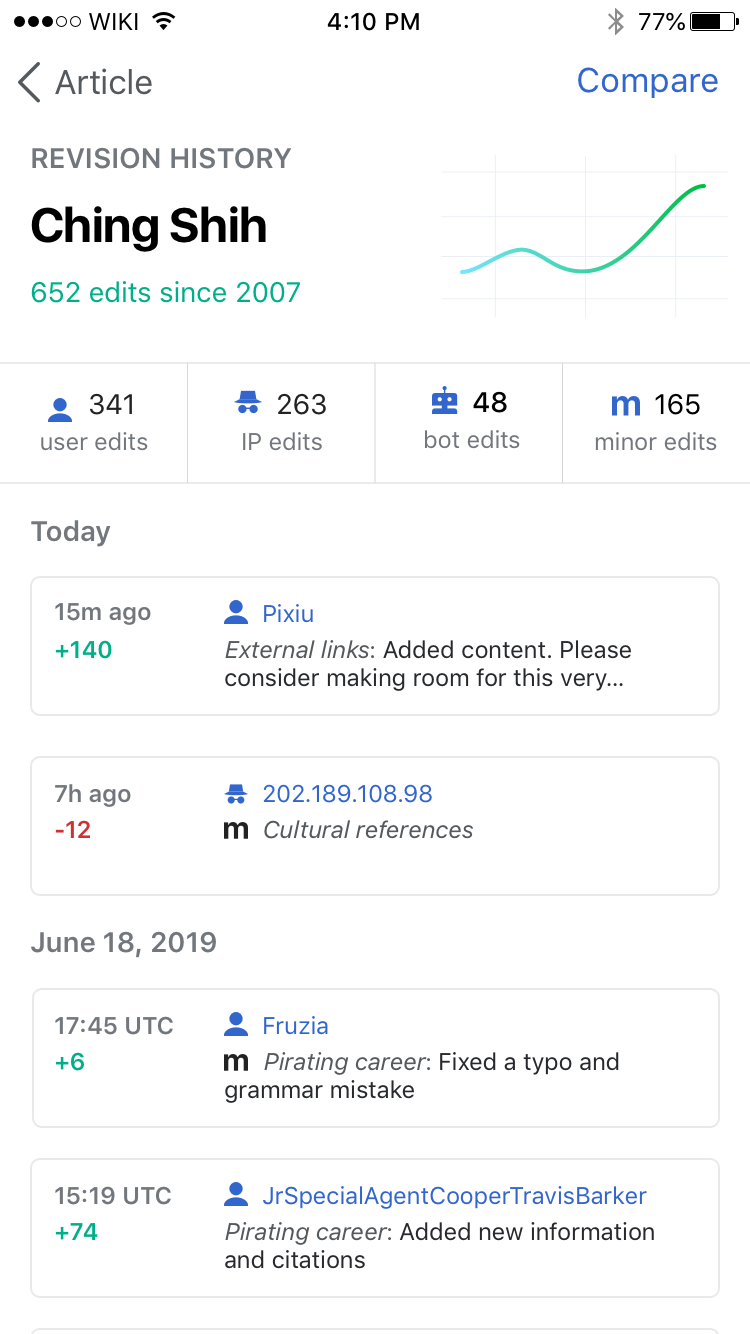 I'm responding here rather than on T231598, because my intent is not to discuss the implementation ("how") but rather to discuss the "what", and to ask what is ultimately desired/acceptable.

This includes a highlight of how many "bot edits" a page has received. This might be a problem, because whether an edit was "bot edit" is only reliably available for edits made in the last 30 days (part of the recent changes database).

Task coding task (T231598) mentions this can be approximated this based on current user status, however this has several problems that I think you should be aware of:

This would initially return a "Unavailable" state to the app, at which point MediaWiki would start crunching the data in a JobQueue job, and the app can check back in a few seconds and either make it appear if available then, or fallback to a "Sorry, check back later" state.

Alternatively, if we really want to invest in this we could proactively compute this automatically after every edit that is saved to a page, and store it long-term in a new database. However, again, in such case the investment might pay off better if we punt it toward T19237.

When user selects 2 revisions and then attempts to select another one (not currently selected):

Should we allow that? Or should the user have to deselect a selected revision to be able to select something else?

My initial feeling was that we shouldn't block actions and when they select another revision, one of the selections should move to that revision. But that leaves me with a question of which selection should be the one that moves. On the web, it looks like there're 2 columns which help determine which selection moves (https://en.wikipedia.org/w/index.php?title=Douglas_Albert_Munro&action=history)

Easy to change so not a blocker either way

@Krinkle, thanks so much for this breakdown of potential paths forward with Bot edit stats. For clarity, does the count on Page statistics (https://xtools.wmflabs.org/articleinfo/en.wikipedia.org/Ching_Shih) only include bots on the page in the last 30 days?

Design-wise, I think we can find a way to move forward without this stat, although I do think that highlighting that bots make edits on Wikipedia is important to illustrate to users, but with these technical constraints I can move forward with developing a different way to do this. @JMinor what do you think?

@NHarateh_WMF Not a problem, here's what was designed: https://zpl.io/2jYPG4r
This would mean that the selection circles become greyed out after two revisions are selected and then if the user attempts to select a third they would see this warning.

Resetting task assignee as the account @NHarateh_WMF is not active anymore.

@Krinkle you raise a number of interesting points about the accuracy of bot edit counts. However, I don't think any of them are so severe as to prevent initial development and release of this element of the new design. I'd like to reassure you that we have built the UI so that stats with longer return times load and appear smoothly when available.

That said, I would strongly encourage you to create a ticket against the API itself, as that would be where any actual iterative improvements and documentation of your specific concerns about this metric will be much more relevant than a closed ticket for the iOS app UI.

We often have a chicken/egg issue with our platform where we don't expose useful information because of very legitimate backend or performance concerns, and we don't solve our backend or data issues because things which have no active users are deprioritized. One side has to go first. Perhaps consider this a chance to push forward some of these decade old improvements for a now live API and UI.