The team would like a new Herald rule that looks like {H246} but for Structured-Data-Backlog , preferring to make a new rule and disable the old, rather than editing the original. I tried to create this myself, but the options here:

do not appear to be available for a new Herald here: 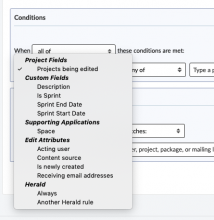 so I played it safe with a request, instead. :)

The projects should be

@Aklapper I went via https://phabricator.wikimedia.org/herald/create/ and I realize now that I mistakenly chose "Projects" instead of "Maniphest Tasks". (－‸ლ)

Now that you've pointed me in the right direction, I've completed the Herald. Thanks! :-D