From today's test we saw several donors asking if we accepted their bank before they selected either Netbanking or UPI. Rakhi had the great suggestion that if we asked donors to choose between those two options *on the initial screen* rather than the second one, donors might be more comfortable with the form. UPI and Netbanking are so common that if donors see these options straightaway they will know that they can specify their banks later in the process.

And step 2 is where they choose: 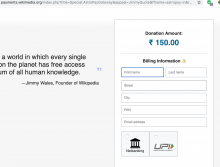 Would it be possible to place the options for UPI and Netbanking on the initial screen in Step 1? It would add 1 button, but would likely reduce donor confusion. The three tickets we saw today were not a landslide, but we will definitely see more of this question when volume scales up.

Rakhi suggests that using the phrase 'Bank Transfer' to group these two methods together may introduce ambiguity into the flow.

We could add the buttons to banners quite easily. However it would need fr-tech work if we want to then remove the choice on the second screen.

Thanks for sharing this feedback from Rakhi, @MBeat33! I just want to endorse the idea ... we have generally seen that offering several methods in step 1 of the banner, particularly methods we know local donors will want, increases donation rate.

I would vote, if possible, to remove the need to then re-select it on payments wiki.

We can make a change where the query string tells us which bank transfer option was selected. The user will land on a payments page where they still have to click "continue" to continue to the right bank.

Change 536715 abandoned by Ejegg:
WIP hide choices when payment_submethod given

@Ejegg are you working on this and should it be moved to "Doing"?

@mepps That patch was mostly just an experiment - I'm not currently working on this one.

When the user arrives at the payments form, would we want to show either:

David also points out that we'd need to drop in a Continue button to make it clear how to proceed and I guess remove the current behaviour when clicking on the submethod (bank icon) which submits the form to prevent users thinking they clicked something by mistake?

Change 539185 had a related patch set uploaded (by Jgleeson; owner: Jgleeson):
[mediawiki/extensions/DonationInterface@master] WIP: Add in support for a preset payment_submethod passed in the querystring. Passing a payment_submethod results in other available submethods being hidden.

Change 536722 abandoned by Ejegg:
WIP hide choices when payment_submethod given

Change 539185 merged by jenkins-bot:
[mediawiki/extensions/DonationInterface@master] Add in support for a preset payment_submethod passed in the querystring. Passing a payment_submethod results in other available submethods being hidden.