Make it possible to collapse the "All entered languages" section when at the end of the section
Closed, ResolvedPublic
Actions

When an item has labels, descriptions and/or aliases defined in a significant number of languages, the list of entries shown after expanding the "All entered languages" section is rather long, see e.g. https://www.wikidata.org/wiki/Q666?useformat=mobile.

TODO: mocks - @Hanna_Petruschat_WMDE would you mind helping with finding the appropriate mocks?

Note: The user experience of the user using the "All entered languages" section is going to be significantly improved once the floating button to collapse the section is added (T205608)

Ping @Hanna_Petruschat_WMDE for the mockup.

https://gerrit.wikimedia.org/r/534766 was done when this issue was first discussed and may or may not help with resolving this, now that there is a formal ticket for it.

@Lydia_Pintscher https://www.figma.com/file/g86G4bYOcUoIPwEbN041nq/180607_Termbox-Mobile-Sprint?node-id=1741%3A2211 contains the "^ Fewer Languages" in the mock up, so I'll rely on that unless @Hanna_Petruschat_WMDE says that's not it

@Pablo-WMDE thanks for attaching the old patch, I'll try to take out of it anything that might be useful/convenient for this task

When the "All entered languages" section is collapsed the button used to expand becomes a collapsing button, labeled "Fewer languages" and styled like in mocks.

not sure I get this correctly (probably the first "collapsed" in the sentence must be "expanded", then it sounds sound to me, or?)

When the "All entered languages" section is collapsed the button used to expand becomes a collapsing button, labeled "Fewer languages" and styled like in mocks.

not sure I get this correctly (probably the first "collapsed" in the sentence must be "expanded", then it sounds sound to me, or?)

Nevermind.. I confirmed my suspicion after reading the task description again, which contains "For consistency, the label of the button expanding/collapsing the section on top of the section should be saying "Fewer languages" when the section is expanded." .. Fixed that AC phrasing accordingly too.

@Hanna_Petruschat_WMDE this can be tested on beta now

Personal opinion: in edit mode, form fields inside the grayed-out areas look like they are read-only now (tried here).

Edit: this should actually have been reported on T223452: Restyle "more languages" & "all languages" sections

Applying white backgrounds to input fields would look like this. 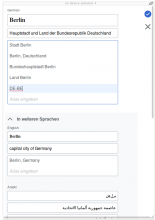 Will follow up with a patch, in case UX decides it looks good. For reference, the color used in screenshot is #FFFFFF

@alaa_wmde I would really like to add the "jumping back to the termbox" after collapsing "all entered languages" by clicking on the lower "fewer languages" button as an AC. Otherwise the meaning of the lower button is redundant as it is meant to keep the user from endless scrolling.

@Hanna_Petruschat_WMDE yeap apologies I forgot to add this AC eventhough we talked about it before. Adding it to task description now and will work on it asap

Change 542431 had a related patch set uploaded (by Alaa Sarhan; owner: Alaa Sarhan):
[wikibase/termbox@master] Scroll to and focus on "All entered languages" after collapsing

No apologies needed @alaa_wmde
I just like to explain UX decisions so everyone following or stumbling upon this task later has the chance to understand. Thanks for adding it to the AC!

Observation: two "fewer languages" buttons can look funny if there are no " all languages" at all. (observed with latest termbox on my dev system)

I saw that as well already but am hoping that these gaps are filled little by little rather than making things more complicated on our side by trying to hide one of these buttons if there is no entry at all.

Change 542431 merged by jenkins-bot:
[wikibase/termbox@master] Scroll to and focus on "All entered languages" after collapsing

@Hanna_Petruschat_WMDE @Jan_Dittrich
The behavior described in AC should be available fully in beta. Please have a look and test for any problems that fall into not fulfilling the AC of this task. Once you approve it, we can plan for shipping it to production on next train.

I guess this is still just in beta?

I guess this is still just in beta?

Moving to To Do for now, as I might steal half-an-hour to do that patch next week.

The "scrolls back the collapsed termbox into view" part of the AC is now also visible on beta.