If results to search traffic are negative, we will not be releasing the change to all projects.

This will not be completed before Megan's leave and is not one of Web's core metrics/goals. We need to reevaluate as a team.

@ovasileva Can you let me know what decisions are resting on this and any risks if we don't tackle this question? We don't have extra bandwidth so would have to drop something else to do this. Happy to discuss further in a 1:1.

Experiment continues to run while awaiting the analysis.

From discussion with Olga: not urgent, but it is important because we need to make a decision about whether to roll this out across all sites.

Benefit of analysis: if we see increases in traffic, we should roll it out because otherwise we're losing out on traffic that we could have.

Discussed with Olga in 1:1 today :

@ovasileva @Mayakp.wiki : @mpopov and I were discussing this task in relation to efforts to monitor Google Search Console (GSC) data (https://phabricator.wikimedia.org/T246694). Since this is a recommended change from Google, we propose doing a quick/high-level check of pageviews and GSC data pre- and post-rollout, but not a full statistical analysis.

Related note:
GSC is still showing clicks to both the mobile and desktop sites, even though we expect to no longer see data in the mobile site. (See Hindi examples below)

P.S. We expect to no longer see impressions & clicks to hi.m.wikipedia (which this change is supposed to mark as alternate and hi.wikipedia as canonical) based on the information at https://webmasters.googleblog.com/2019/02/consolidating-your-website-traffic-on.html

Given that this has been pushed back so much, I'm thinking we should prioritize this as one of the first things Megan takes on when she comes back.

@ovasileva - Can you confirm the dates that these changes were deployed to the test wikis?

@ovasileva - Can you confirm the dates that these changes were deployed to the test wikis?

We checked all of those wikis in the Google Search Console and we're still seeing numbers for the mobile sites, but based on what Google wrote in https://webmasters.googleblog.com/2019/02/consolidating-your-website-traffic-on.html we would expect to see 0's, since the premise is that all the impressions and clicks for the alternate site would be rolled into the canonical site's numbers.

Started with this notification in GSC:

Your site has been switched to Mobile First Indexing
The majority of Google's crawl requests to your site will be made using a mobile crawler.
Switch date: April 21, 2020

went on to https://webmasters.googleblog.com/2016/11/mobile-first-indexing.html?authuser=3 and saw

Sites do not have to make changes to their canonical links; we’ll continue to use these links as guides to serve the appropriate results to a user searching on desktop or mobile.

then went to look at https://developers.google.com/search/mobile-sites/mobile-seo/separate-urls

On the desktop page (http://www.example.com/page-1), add the following annotation:

On the mobile page (http://m.example.com/page-1), the required annotation should be:

I noticed that our mobile pages have the canonical part (for example https://it.m.wikipedia.org/wiki/COVID-19)

And that our desktop pages (e.g. https://it.wikipedia.org/wiki/COVID-19) have

which makes me wonder if we're seeing issues because

this technique is now an anti-pattern. If the asset you need is available on SSL, then always use the https:// asset.

I wonder if omitting the canonical bit for desktop pages (since Google's documentation doesn't mention anything about a canonical page declaring itself as the canonical version of itself) and switching from protocol relative URL to an https:// version would yield the results we expect.

So I don't know what's going on in GSC but at least the tagging DOES appear to be working, disregard the comment above I suppose? 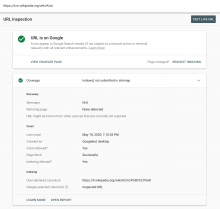 The URL selected by Google as the authoritative version of this page. Other versions can be served in search results, depending on factors such as the user's device type or language. This is not available in the live test, as Google selects a canonical URL only after a page is indexed.

I completed a review of pre and post-deployment pageview trends to both the desktop and mobile versions of the test wikis, focusing on external search-related traffic, to determine if the change resulted in any significant impacts.

TL;DR: The results do not indicate any negative impact on search-referred traffic to the test wikis. There were no changes in traffic to either the desktop or mobile versions of the site that could be clearly attributed to the deployment of this change.

See the summary below and codebase, report for further details.

There was no sudden decline or increase in search-referred traffic following the change. In addition, the traffic changes that follow the deployment of the change on October 2nd follow the same patterns as previous years and are seen on a set of wikis I reviewed where the change was not deployed [1] , indicating that these fluctuations are likely seasonal and not attributable to this deployment.

To confirm, I reviewed average daily pageviews during two week period (15 days) before and after deployment for this year and compared to the changes that occured over the same period the previous year.

The impact on overall pageview traffic was fairly flat as well.

[1] While there was not a set control for this test, I reviewed traffic trends for the following set of wikis where the test was not deployed to compare overall trends: Bhojpuri (bhwiki), Cherokee (chrwiki), Kazakh (kkwiki), Catalan (cawiki), French (frwiki), Yoruba (yowiki), Kalmyk (xalwiki ).

@ovasileva - Let me know if you have any questions.

Discussed results with Olga in June 11th meeting. As there was no identified negative impact, this change will likely be rolled out to all sites. I will publish a summary of my findings and link to report on https://www.mediawiki.org/wiki/Reading/Search_Engine_Optimization.

Thanks @MNeisler! Resolving this. Follow up and implementation will be continued in T255458: Enable $wgMFNoindexPages for all wikis