In komi wiki (and in other wikis as well) there is a problem with ӧ-letter in article names and in section headings: the diaeresis part moves to a totally wrong location.

Examples on how that looks like in Wikipedia article names:

When I copy that letter to the Estonian Wikipedia article name the same issue appears. So this is indeed general and affects all Wikimedia wikis.

Note: there is no problem when that letter is in the article text. Only the article names and section headlines seem to be affected.

On which browser does it happen?

I have now asked what others see and have so far gotten that in one case everything is perfectly normal and in one case it is kind of normal (the letter is fine, but seems to be clearly from a different font).

Thanks. I don't see this problem on MacOS. This may be a problem with Windows. Does this happen in all browsers on Windows—Firefox, Internet Explorer, Edge? Does this work better on other websites?

I see it with the slightly odd font (but certainly not as broken as above) on Chrome (also 79.0.3945.117) on Ubuntu, FWIW. So that does suggest the full breakage above is exclusively a Windows issue: 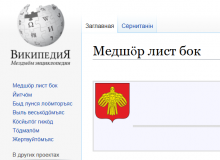 The result with Edge in my computer.

That was sent to me from Udmurt Wikipedia.

That person was using Chrome and having the same problem. And one other Udmurt also showed that she has this problem in here computer (at least with using Chrome).

Just for it to be clear: Udmurt and Komi (and probably some other languages as well) use this letter. But if I copy it to Estonian Wikipedia [use it there], then it gives me the same messed up result. I.e. it doesn't depend on what Wikipedia version it is. In some computers it doesn't show the letter right.

Just for it to be clear: Udmurt and Komi (and probably some other languages as well) use this letter. But if I copy it to Estonian Wikipedia [use it there], then it gives me the same messed up result. I.e. it doesn't depend on what Wikipedia version it is. In some computers it doesn't show the letter right.

Yes, I understand. Udmurt and Komi are simply the most affected languages because they frequently have it in page titles.

What I'm wondering about is whether this can be resolved by tweaking the styles in MediaWiki core or in particular wikis, or whether this just has to be fixed by Microsoft. How well does it work on other websites in the same languages?

Komi told me that on the other sites it works fine for him all the time (just not in Wikipedia). I personally don't know that many about those sites, but on my computer, I also didn't witness any problems with those few I visited. And Udmurt told that in here computer at home everything worked fine (she is currently in Estonia and using a local computer).

I was now looking at the random articles in Udmurt Wikipedia and came across the following:

I can reproduce the problem (testing on https://kv.wikipedia.org/wiki/Глӧт).

After some testing, it seems that Chrome is the only browser that has problems with this (along with other Blink-based browsers). The page renders correctly on Firefox, Internet Explorer, and Edge (although it might stop rendering correctly once the new Blink-based Edge rolls out).

The problematic character is "ӧ" U+04E7 "CYRILLIC SMALL LETTER O WITH DIAERESIS". Apparently this character is missing in the Georgia font, which we use for headings (according to http://www.fileformat.info/info/unicode/font/georgia/missing.htm).

I'm guessing that it is being rendered using a generic combining diaeresis, and that this works incorrectly for Georgia in Chromium. (And apparently on Ubuntu, the missing character is instead just replaced by a character from a different font, resulting in the screenshot on T243119#5814877.)

Oh, thanks, I had a vague recollection of doing something like this :)

... Maybe, as a workaround until this is properly fixed in Blink, these wikis can define a font other than Georgia for their heading in Common.css?

So far I have identified that:

There might be some more, but outside Incubator I didn't notice any.

Has there been any progress?

@kruusamagi: See https://bugs.chromium.org/p/chromium/issues/detail?id=673095 as that is where to ask your question.