The Wikimedia Commons Android app allows users to upload pictures from their Android phone/tablet to Wikimedia Commons. Commons is not only the image repository for Wikipedia, but an independent project that seeks to document the world with photos, videos and recordings.

The project is about adding a leaderboard based on user's edits using Commons. The feature will include only edits made with the mobile app, and users who have shown interest in this activity.

The score could reuse some numbers from achievements, but should only count edits done with the mobile app, because otherwise Vicuna/etc users will dominate the top of the leaderboard even if they don't use the mobile app.

Tapping the name of a user in the leaderboard should open the gallery of that user's pictures, probably as a browser URL for now. Knowing they are being watched by their peers will probably reduce the temptation to "cheat" (for instance by uploading 1000 pictures of the same spoon)

To make it more visually attractive, I suggest using as a kind of avatar the user's most successful picture (the one which is used the most in the wikipedias/etc, or a random one if the user's pictures are not used yet anywhere). Random idea: Users like to personalize their avatar, so we could also offer the option to select one of the user's uploads as an avatar picture, but that may lead to more selfies, so this option could be an privilege to unlock (only users who are above level 5 for instance).

There is a lot of data to show, so we have to think the UI carefully. Here is just an idea: 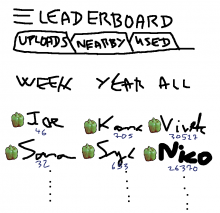 The vegetable is a placeholder for the user's avatar.
I forgot to write the position number (1, 2, 3, etc). It is important because I want to know whether I climbed from 37th to 36th, and counting is boring.

The leaderboard lists should probably be calculated on the server where we currently perform achievement calculations, and cached (re-serve the same results if less old than 1 hour). The user will probably upload a few more pictures in 5 minutes and come see the leaderboard again. So we could recalculate only that user's new scores (and let the other people's scores the same until the next hour comes). In other words, only the users who keep looking at the leaderboard would have their score grow at smaller intervals than 1 hour. That 1-user-only recalculation itself should be cached something like 1 minute because a picture can not be neatly uploaded in less time, and to avoid useless server load.

The avatar miniatures (generated by mediawiki) should be cached by the app for like a month.

How should the user start showing up in the leaderboard?

Automatically when the user performs one of the actions. We can automatically add the user in the leaderboard, once he performs any of these actions

In our backend, we are planning to have:

Nice to have skills

@maskaravivek , @Nicolas_Raoul I think the project is good. I wish to contribute in the best way possible by co-mentoring the project. Thank you

The link in the description redirects to a label that doesn't have any issues at all. Maybe it could lead to a different label like good first issue instead?

@maskaravivek @Nicolas_Raoul I am willing to participate in GSOC 2020 and would like to contribute to this project. I have some past experience in the Android Commons app and researching about this enhancement.

@maskaravivek Sir, My name is Abhishek Garain, BTech 3rd year student from IIIT Gwalior. I am willing to work on this project during GSoC'20. The project mainly revolves around building an UI and an API for contributions calculation which populates the leaderboard. To get a better understanding of building the API, I would like to know about the db schema which is used for wikimedia commons. I have also applied for toolforge tools membership.

Welcome everyone and thanks for showing interest in this app.

@Agarain99 We are planning to host a new DB on toolsforge and the schema isn't decided yet. Designing and implementing the schema is part of the GSoC task.

Sir , My name is Nishant and I am student of JNU.
Here is my linkedIn Profile .https://www.linkedin.com/in/nishant-sharma-46b655165/?originalSubdomain=in
.I found this project interested and i want to contribute to this project during GSOC 2020 and I have all the required skills.
Thanks you.

Sir, My name is Amitoz Singh, BTech 3rd year student from Bpit. I am willing to work on this project during GSoC'20. and I have all the required skills I have worked with java,kotlin and rxjava. Here is my Linkedin Profile. https://www.linkedin.com/in/amitoz-singh/
Thank you.

Greetings everyone,
I added a subtask but it is not showing up here, perhaps i am doing something wrong.
Here's the link to the subtask:
T249027: (GSoC 2020 proposal) Implement Leaderboards

Greetings everyone,
I added a subtask but it is not showing up here, perhaps i am doing something wrong.

@318anushka yes i did that and then it got reflected in the task graph but not in the comments, thanks anyways :)

Is everything in this project task planned for Google-Summer-of-Code (2020) completed? If yes, please consider closing this task as resolved. If bits and pieces are remaining, you could consider creating a new task and moving them there.

Yes, it is done, thanks!