We have this:
There are some strange characters appearing before qualifier values on file pages. Sample file: https://commons.wikimedia.org/wiki/File:M%C3%BCnster,_LVM,_B%C3%BCrogeb%C3%A4ude_--_2013_--_5149-51.jpg

We want this:
No character weirdness, please 😄 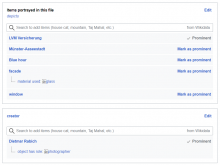 During development, please test the following:

Ramsey nerd-sniped me with this, so I dug briefly and found a Windows-specific bug which seemed on point. Initially when talking with him I thought it might be a random space character trailing a line in our output HTML, but I then found that at src/View/MediaInfoEntityStatementsView.php:371, we explicitly add the line separator character, which seems out of place here. From the Unicode docs:

A line separator indicates where a line break alone should occur, typically within a paragraph.

Given there is no line break rendered here, at least not on my screen, perhaps it would be more appropriate to use &nbsp; (or similar) than &#8232; here, which would also greatly increase readability (i.e. you wouldn't need to look up the HTML decimal code the next time you wanted to figure out what this code was doing. Chrome on Windows should be able to handle a non-break space just fine, as most browsers have since the dawn of time.

@matthiasmullie seems to have made both changes (fd85f8b0 and 47dbc1be) to WBMI to add this character in, so perhaps he can shed some light as to why, and maybe dissuade us from a regression.

Not a dupe, but yes: related.
This one has already been fixed, but in order to fix T247711, this one also had to change :)
See more elaborate comment in other ticket.