Follow up from T239442: Homepage: restyling of modules and preview cards on Mobile

a. Expected Icons are 20x20 inside 32x32px icons
Actual: icons are smaller and inside smaller icons

b. Expected ~8px more space between icons and labels

f. Text colour of items when completed should be Green30

@RHo identified that the following points presently still have issues on Mobile. I've updated the task description with a point about Green30 color for completed tasks.

The screenshot is from testwiki wmf.31 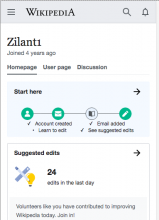 For the reference on UI details - T239442: Homepage: restyling of modules and preview cards on Mobile.