In January 2018, an experimental instance of the Q&A platform "Discourse" was set up for developer support at https://discourse-mediawiki.wmflabs.org . See https://phabricator.wikimedia.org/T180854 .

Since its launch, the usage of this instance has declined: https://phabricator.wikimedia.org/T247010#6270883
On average, there are two users who are engaged daily.

Other support venues which exist in parallel are much more active, such as IRC, mailing lists, [[mw:Project:Support_desk]], [[meta:Tech]], local technical village pumps, newsletters, Zulip for outreach programs, or other third-party sites such as mwusers.org, StackExchange.com, or Reddit.

Discontinuing the least frequented venue (which unfortunately is Discourse though it seems to be a great communication platform) would keep us from further fragmenting our conversations and efforts.

I propose to make discourse-mediawiki.wmflabs.org read-only by the end of August 2020.

I have boldly updated wiki pages about the somewhat unclear status of mediawiki-discourse.wmflabs.org and removed links from some other pages (e.g. outreachy/gsoc, TechEng team, etc)

Basically, the answer to the questions posed in these task might or might not be influenced by events in Discuss Space, if eventually a team of volunteers takes over. Other than that, my involvement in both Discourse instances was motivated by the hypothesis of having a platform supported and maintained by my team at the Foundation. Since this isn't happening, I'm transitioning out as admin in both instances.

if eventually a team of volunteers takes over.

@Qgil: From my personal point of view (not speaking for any team), things to sort out first are how not to have production data in a non-production instance, backups, proper puppetization, technical responsibility. And if a team of volunteers could sort out all these things themselves.

There is a banner... In addition, any admin could update https://discourse-mediawiki.wmflabs.org/t/welcome-to-wikimedia-developer-support/8

Heads-up to @Tgr as he seems to be the user who is most active in that instance lately. 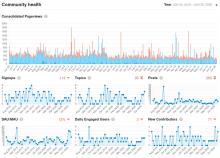 I have published a proposal to make this instance read-only by August 2020: https://lists.wikimedia.org/pipermail/wikitech-l/2020-July/093642.html

Space has been canceled

What's discourse.wmflabs.org, BTW? 🤔 I couldn't find any information about it on a quick search in meta.

@Kaartic: Thanks for catching that. Looks like URLs broke. I've updated the link in the task description to one that seems to work.

It used to be a post about the closure of discourse.wmflabs.org. Not relevant to this task.

What's discourse.wmflabs.org, BTW? 🤔 I couldn't find any information about it on a quick search in meta.

You can find it in the page history of https://meta.wikimedia.org/wiki/Discourse if you are curious. It's the initial Discourse instance, it was set up by @AdHuikeshoven five years ago, IIRC. It was mainly used for testing.